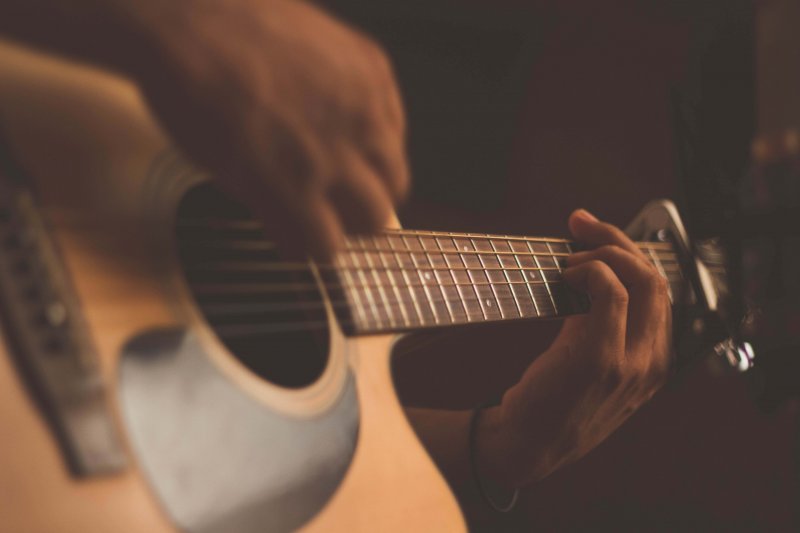 Are you looking for some easy acoustic guitar songs to play? If so, you’re in the right place! Today, we’re going to share 10 fun but simple songs you can play on your acoustic guitar, along with a video and the chords for each one.

Instead of you trudging through difficult music that you don’t enjoy playing, check out this diverse list of songs to play.

Note: Making music is tricky business. There’s a lot of multitasking, and it takes time to get things flowing the way you want to hear them. Keep in mind that guitarists all have different strengths and weaknesses, so a song that’s easy to some may take more work for others. Keep practicing, and don’t get discouraged!

What Are the Best Easy Acoustic Guitar Songs?

Whether you’re just starting out or you’ve been playing a while, and you’re looking for easy songs to play, there are tons of options for you! This list shares various styles and techniques so you can find something that’s just right for you.

Thank you to Shutup & Play – Guitar Tutorials for the use of this video!

‘Ventura Highway’ is one of the best beginner acoustic guitar songs. It’s a cool old song with great, simple harmonies. With that said, it also has a fun lead lick, that’s a little more challenging. You can focus on the chords first if you’re looking for an effortless song to start with.

You can get through the whole song using just two chords: Fmaj7 and Cmaj7. The switch between the two should be fairly easy if you play the two chords as shown in the link below.

If you have any difficulties, try keeping the first finger in the Fmaj7 chord down so that you’re playing the standard C chord shape. If you’re playing this along with the recording, you’ll want to capo at the 2nd fret, to make the chords Gmaj7 and Dmaj7 (played using the same shapes and fingerings).

Get the chords: Ventura Highway

Thank you to MysticGuitar77 for the use of this video!

A little heavier of a song, but it’s a great one! Originally played on an acoustic, ‘Bend the Bracket’ uses almost exclusively power chords, which you can slide around on the fifth string. One tricky bit of business is that Chevelle plays this on a guitar tuned down one half-step.

Get the chords: Bend the Bracket

Thank you to Naphthalene Man for the use of this video!

Despite the length of this song, there are only two chords in (most of) it, and one can be played with only one hand. How’s that for easy? Like Chevelle’s song, Lou Reed also has his guitar tuned down a half step. If you already returned for the last song, don’t tune back up yet!

If you can form a D chord with your left hand, you’re already well on your way to playing this entire song. Essentially, he bounces between a D chord in the usual formation and a G which can be played using the open 4th, 3rd, and 2nd strings. Of course, if you’re already comfortable with a six-string G chord, feel free to mix it in as you think sounds good.

These chords are generally played whole and then picked with the notes separately while the left-hand stays unmoved on the chord. The only other part of the song is the ending.

The ending is where the other chords come in. However, the chords at the end are played using the same D shape you’ve already mastered. Just slide up to the 7th and 9th frets.

Get the chords: Heroin

This song remains one of my favorite good acoustic guitar songs. You may see versions of the chords of this song listed as G-Em-C-D. While you could play these chords along with the song with no trouble, it would lack some of the sound of the original. It could also be more difficult.

So in the same vein of keeping it easy and sounding better anyway, let’s look at the real chords. G-Em7-Cadd9-Dsus. If those look more complicated, don’t worry. While they’re more complex from a music theory standpoint, they allow us guitarists to keep two fingers down for the WHOLE SONG!

Go ahead and plant your ring and pinky fingers on the 2nd and 1st strings at the 3rd fret. The rest of the chords can be formed as follows:

Get the chords: Disarm

Another song that is all power chords, also known as 5th chords (A5 ). Kurt often played his guitar tuned down a half step like some others here. As with the Chevelle song, the power chords make it easy to play a fret lower if you’re in standard tuning.

Get the chords: Dumb

Thank you to Thomas Zwijsen for the use of this video!

A metal acoustic song? Absolutely! Some guitarists might claim this shouldn’t be on a list of easy acoustic guitar songs, but it’s actually relatively straightforward with a bit of practice.

I’ve personally had students for whom this would be less difficult than previous songs on this list. That being said, if fingerpicking isn’t one of your strengths, use this as a manageable introduction to improve your skills.

Get the chords: Bard’s Song

Thank you to neonguru12 for the use of this video!

This is a hauntingly beautiful song that I’m guessing many of you haven’t had the pleasure of hearing before. It should also be a breeze for most beginners.

Get the chords: Embodyment

Thank you to Wei Hu for the use of this video!

‘Moorish Dance’ is one of the best acoustic guitar songs that’s easy for left-handed players. However, it could be tricky if you have a hard time playing without a pick. If you have trouble stretching for chords and getting all the notes to ring, this song will give your left hand a break. You’ll only need it for six, yes six, different notes.

Beyond that, your right hand will alternate between playing the tune with the thumb and playing some higher accompanying notes with the index and/or middle fingers.

Fun story: I was recently talking with a friend and fellow guitar teacher who had broken a bone in his right hand that connected his ring and pinky fingers to his wrist. He mentioned that some of his older students weren’t convinced he could still be a good teacher without all his fingers. He used “Moorish Dance” as his “show-off piece” to prove otherwise.

Get the chords: Moorish Dance

Technically speaking, this is actually a set of four songs, but they’re all played as a complete piece of music. They also all use the same tricks to keep it easy on the fingers. This is one of the more complicated songs on this list, but that doesn’t mean it has to be hard!

If you look at a bare and accurate chord chart of this song, you’d see a whole bunch of complicated-looking chord symbols with ‘sus’s and numbers and slashes. While you’re all smart players and probably know what those mean, it’s still more information to process and send to our fingers.

The key here, rather than dealing with all of these complicated and frequently difficult to change between chords, is to make sure you’ve got the tuning right. We’ve already covered songs in this list using an alternate tuning (Eb or half step down tuning), but this is a bit more radical. We’ll leave the highest two strings alone, so they’ll remain at E and B, going down from there, we’ll tune the 3rd string down to E, the 4th string **up** to E (always use caution when tuning higher than standard), and finally the 5th string down to E, to match the 6th string.

If you’ve been keeping track, that leaves us with, from low to high, EEEEBE. From there, follow the tab, since your sense of where chords usually are will be totally out of whack. It’s a whole bunch of open and straight barre chords with a few little licks sliding down the first two strings.

Thank you to Learn Guitar Favorites for the use of this video!

If you’re looking for some country tunes, here you go! ‘Cruise’ is another relatively simple one.

Remember the chords from “Disarm”? Same deal here! If you prefer the sound on the Dsus chord, you can play a standard D shape, but keep that 3rd finger planted! The order is G-Dsus(or D)-Em7-Cadd9. Have fun!

Get the chords: Cruise

Hopefully, you found a few new good acoustic guitar songs on this list, even just something you can enjoy listening to. With a list like this, you’re bound to find a song that suits your strengths and weaknesses.

If you haven’t, this list isn’t exhaustive, so don’t give up! A well-versed guitar teacher is a great resource to find the right songs for you. You’ve got a knack for guitar (everyone does in one way or another), and you have to figure out what it is.

What guitar song are you looking forward to learning? Let us know in the comments below!

Post Author:
Kirk R.
Kirk is a classical, bass, and acoustic guitar instructor in Denver, CO. He earned a bachelors of music in Guitar performance at The College-Conservatory of Music in Cincinnati and he is currently pursuing a masters degree in performance.  Learn more about Kirk here!