As you progress in your drum lessons, you will want to learn some more challenging drum songs. Here, San Diego drum instructor Maegan W. shares her list of songs that will take you beyond the beginner stage and help you advance to an intermediate drummer…

Are you tired of playing drum songs for beginners? Are you looking for some songs to play that aren’t too easy, but aren’t super challenging, either? Well, look no further. If you’re a drummer trying to boost your skills, here are my top 10 picks for fun, drum songs to play for intermediate drummers.

These songs all have only two or three different grooves, and they contain basic, easy-to-learn drum fills. The form for each song is pretty standard. Most of the songs follow a pattern similar to this:

If this seems confusing, take some time to learn and identify different sections in a song. Let me take you through a brief explanation of a song’s structure.

The intro will typically be a short instrumental section or vocal intro that only happens once.

The first verse begins after the intro.

The verse tells the story of the song.

Generally, a verse does not repeat itself.

After a verse, the pre-chorus sets up the chorus.

The pre-chorus usually stays the same throughout the song.

The chorus is the catchy part that of the song that everyone sings along with.

The chorus is the part of the song that repeats the most.

After another verse, pre-chorus, and chorus, we get to the song’s bridge. The bridge generally only happens once and it stands out as the climax of the song.

Usually after that, the pre-chorus and chorus come back in before the song ends. The ending may fade out, it may be instrumental, or it may just be the chorus repeating itself.

It’s very common and effective (in most popular music) for the drums to be consistent and complementary to the music. In the songs listed below, the drums play a dedicated “verse groove,” “pre-chorus groove,” and “chorus groove.” They will also often have a different groove or drop out completely in the bridge.

Before you try to play the songs, listen to them several times through. Map out the form and the grooves, this will save you time in the long run.

Once I’ve mapped out the rest of the song, I try to figure out the fills. Drum fills can be simplified without compromising the integrity of the song. Never sacrifice the groove for a drum fill! It’s way more important to keep good time than it is to play an awesome fill that throws off the time for the band.

Now that we’ve gone over form, let’s get to the songs! I’ve added songs from different music styles so take what you like, and leave the rest..or challenge yourself to learn the songs that are a different style from what you normally play.

Let us know what you think of these songs in the comments below.

Remember, everyone has a different idea of what intermediate means. To me, these songs are challenging, but an experienced drummer can typically learn them within two to four weeks.

Some people will nail these in a day, and some in a couple of months. Go at your own pace and have fun!

Looking for more songs to play? Check out our ultimate list of drum songs! 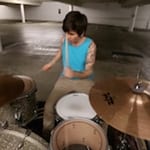