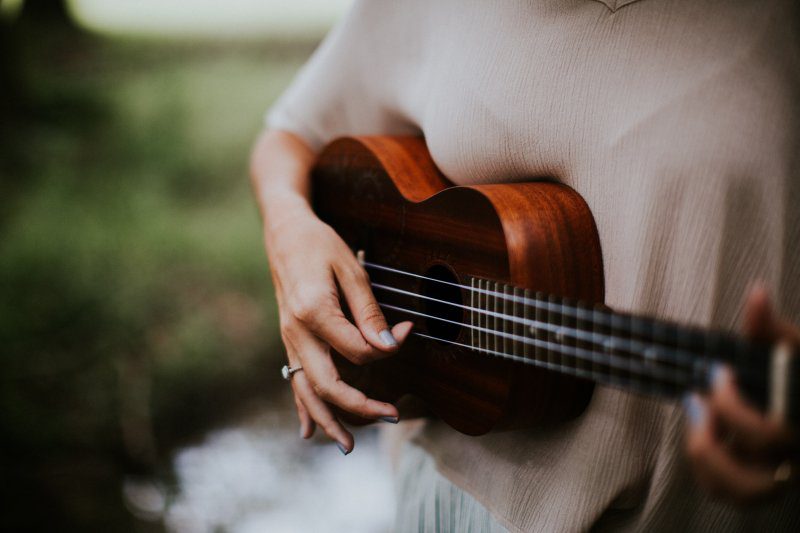 Are you trying to learn a song on the ukulele but can only find guitar chords? Several years ago, I learned an easy trick to convert guitar chords to ukulele chords and I’m going to share that with you!

I’ve played guitar all my life and have a collection of Gibson and Epiphone Les Pauls. For my birthday a few years ago, my girlfriend bought me an electric Les Paul-style ukulele.

I’d never played a uke before — ever. I had to go online to even find out how to tune the thing! Undaunted, I discovered something. I suddenly realized my knowledge of playing the guitar would make playing the ukulele pretty easy. Continue reading to learn what I did!

Are Guitar Chords and Ukulele Chords the Same?

While there is, in fact, a difference between guitar and ukelele chords, there’s a similarity! What I realized was that the standard tuning is from the top string G – C – E – A. The G string is thinner than the C string, sort of like how a banjo has a thin string before the first bass string.

What I realized got me excited to get playing! The ukulele’s string order (GCEA) is the same set of intervals as the four thin strings on a guitar (DGBE), just up a fourth!

A fourth just means a distance between notes of four letters apart. You count each letter including your starting note, like A to D (A, B, C, D = four).

This means the same chord shapes you use for guitar can be used to make ukulele chords if you simply transpose that chord up a fourth.

How to Convert Guitar Chords to Ukulele Chords

Here’s a good example to help you convert guitar to ukulele chords. Think about a basic D chord. On a guitar, you only really need the four thinnest strings to play it anyway. When you play that same shape on a ukulele, what you get is a G chord. 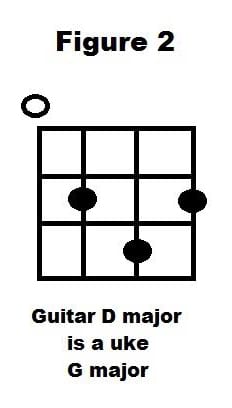 Remember when you first learned the G chord on guitar? You can play a simple version of that on the last four guitar strings too, with the high E string fretted at the third fret, and the D, G, and B strings open.

Now if you play that same shape on a uke, you get a C chord. See? It’s just up a fourth! 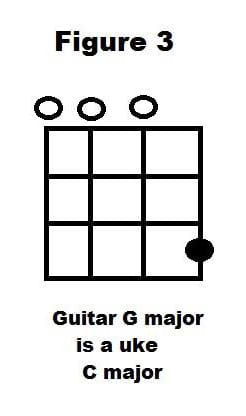 Now think about an E minor chord. On the guitar, if you didn’t have those two heavy E & A strings you could play an Em with just one finger on the D string at the second fret and the three remaining strings open, right? 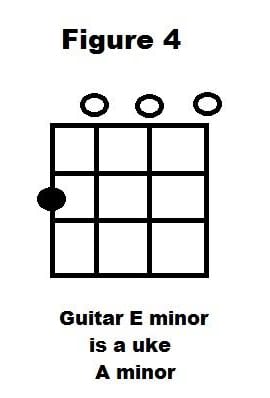 Of course, this isn’t limited to one-finger chords, though on a uke there are plenty of them. Take a full barre chord from a guitar, remove the first two bass strings from the chord chart, and what you’re left with is this: 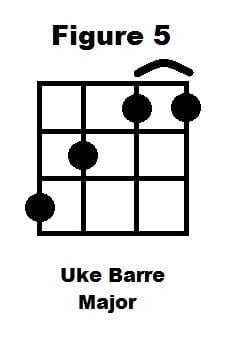 This is still a major chord shape on a uke. You can make it minor, or 7th, or sus4, or anything else the exact same way you would on a guitar.

Just remember when you’re converting guitar chords to ukulele chords that you make the root note transposition. So, an A shape on guitar = D on a uke. B minor = E minor. C diminished = F diminished, and so on.

Guitar players are pretty used to thinking about the various barre chord shapes as being major, minor, 7ths, or what have you, and just putting them at whatever fret they need them to produce the right chord.

Those same shapes still work on a uke, only everything is moved up that 4th.

One Last Thing When Converting Guitar Chords to Ukulele Chords

You simply alternate your thumb between the uke’s G and C strings, while the index and middle fingers play the remaining E and A strings, and you don’t need to use your ring finger at all – unless you want to!

I hope you have fun as you learn how to play the ukulele with this easy transition from guitar chords to ukulele chords! It’s a truly fun and easy instrument to pick up quickly and can be every bit as challenging (but fun!) as a guitar. Happy picking! 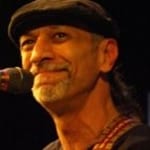 Post Author: Mike S.
Mike S. teaches guitar, cello, music theory, singing, and many more subjects in Lehighton, PA. He has been a professional musician and instructor for over 30 years. Mike owns his own recording studio and private teaching room. Learn more about Mike here!