If you’re anything like me, you’re always trying to find ways to sharpen your skills as a musician and as a bandmate. Even though you try your best, there are still days when nothing seems to go right.

So I wondered, what would the absolute worst band practice really look like? Guitar teacher Jessica D. shares her nightmare vision of a rehearsal gone terribly, horribly wrong…

Step 1: Nothing’s worse than not knowing if your bandmate will show up for practice, so why not have a lead singer who regularly gets arrested for their art?

Maybe she doubles as a graffiti artist, maybe he protests animal cruelty with a ukulele. Regardless of his or her deal, she’s messing up the band, man! Pro tip: Accept her collect call from prison, duct tape the phone to a mic and play fast: Inmates don’t get a lot of talk time.

Step 2: Make sure your dad is musical, always wanted to be in a band, and then set up your practice in his garage.

That way he can keep sticking his head in to say things like, “You guys need anything?” and “It’s sounding pretty good in here.” This is the gateway to him working his way over the microphone and finagling a guitar out of your hands so he can play a cover of “Black Cow” real quick.

Step 3: Alternatively, have a dad who uses the garage as his workshop.

He always decides he has to drill a hole into that piece of wood just as soon as you get the Marshalls fired up. Dad drill: 1. Guitar: 0.

Step 4: For a truly disastrous practice, it’s necessary that someone in the band has a cold.

There’s always a case of the flu, strep or mono going around. Bonus points if the singer is sick.

Step 5: Make sure half your band smokes.

Every two songs the drummer, guitarist, and triangle player will be outside getting their nicotine fix while you’re inside wondering how in holy hot cakes it takes 25 minutes to smoke a cigarette.

Someone in the band must have a serious girlfriend or boyfriend (probably the bassist). Ask them to bring their “other half” along so they can give unsolicited advice to the band, break out in a spontaneous fight, or even better, storm out and then the bassist will have to chase after them. Band practice postponed!

Step 7. Include your sibling in the band, but be sure it’s the one you get along with the least.

Undermine each other at least a handful of times during practice, leaving the rest of the band scratching their heads and taking multiple cigarette breaks. Taking digs at each other or insulting each other’s technique or ability is fine, but if it can come down to fisticuffs every other practice, you’ll start to get a reputation and you know what they say—no press is bad press…

Step 8. Use this one with caution, for serious pros only–Develop a nasty little drug habit.

Heroin or cocaine seem to be the rock drug of choice but those are old school, expensive and way too creepy. No, instead, stay modern and show the kids you’re relevant: get into ayahuasca or good old fashioned pain killers, like codeine. Heck, start a trend and get addicted to Advil, but make sure you let everyone know about it–gotta keep that press machine churning.

Step 9. It’s advised the drummer get a flat tire on their way to practice.

Bonus points if it’s a speeding ticket, because when they finally arrive, they’ll demand that everyone has to split the fine with them, which will spark a debate, “I wasn’t driving, why do I have to pay?” / “Because it’s your band, dude,” and the next couple gigs will be spent raising the funds to pay off the fines. Are you having fun yet?

This is an easy one. Just play your ax really hard, like you’re Jimmy Hendrix meets Jimmy Page, even if you only know four chords, and snap a string. Make it a good one, like an A or a B string, none of this high E string nonsense, so you’ll HAVE to stop band practice and change it.

While you do that, your sibling can put you down which will start a fight, the band can go take a cigarette break, the bassist’s girlfriend will run off, the drummer will take a ride to blow off some steam and get another speeding ticket, the jailed singer will call while you’re out and blow their one chance at singing into the phone, and your dad will decide this is the perfect time to try out that new drill bit.

At this point at least one band member should quit, meaning you’ll have to find a replacement and that could take weeks. Band practice on hold til further notice!

Got a band practice horror story? Tell us all about it in the comments below! 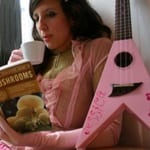