If you’re taking Japanese lessons, you’ve probably learned the basics like greetings and phrases. So, let’s get into some fun Japanese vocabulary. Here, Brighton, MA Japanese teacher Kaoru N. teaches you the names for common animals in Japanese…

Humans and dogs have a special bond, and just like in the rest of the world, dogs are important animals in Japanese.

There are two kanji letters for “dog,” but the second one is less common, and only used when it’s part of a word, for example: “走狗”,“天狗,” (running dog).

Writing “cat” is a bit more complicated than writing “dog” in Japanese. Notice this kanji also contains the “beast-hen.”

There are a lot of Japanese legends and idioms about monkeys, they’re important animals in the Japanese culture.

In some Japanese hot springs, you can bathe with wild monkeys. If you go sightseeing in Nikko, you will see lots of monkeys in the streets. Make sure to hide your plastic bags from the monkeys in Nikko. The monkeys know plastic bags usually contain food, and they will attack you and try to take your food!

A law protects the monkeys, so you cannot harm them. In some cases, monkeys are smart and friendly; in other cases, they can be sly and mean.

In Japan, the fox is treated both as a monster and a god. According to Japanese superstition, these animals have supernatural powers and can play tricks on humans.

Because of these supernatural abilities, Japanese people generally respect and fear animals that dwell in the wild. A fox represents these mountain-dwelling animals. There are still a lot of fox shrines all over Japan.

A raccoon is another wild, mountain-dwelling creature. There is a Japanese expression about these kinds of “monstrous” animals: “狐狸の類い” (kori no tagui),which means “a kind of fox and raccoon.”

Bears aren’t supernatural, but they’re still dangerous. Several people are killed by bear attacks each year. Sometimes,  bears visit human-inhabited areas in search of food. If you go to the mountains in Japan, watch out for bears.

Deer live deep in the mountains in Japan. But In Nara, you can see deer everywhere.

Deer are a nationally-protected species, so you can’t harm them, even though they can potentially hurt you. Just like monkeys, they’re cute but dangerous.

There are two different kanji for this animal, and they’re pronounced exactly the same. The kanji on the left means “bird,” but the kanji on the right refers to a chicken or a rooster.

Cows are important animals in Japan, especially as agricultural resources. Not only are cows useful for meat and milk, in the past, ushi-kai (cow shepherds) used cows to till the land and carry heavy supplies.

You can’t talk about a cow without mentioning a horse, of course. For military and agricultural purposes, horses are just as important as cows.

Surprisingly, in Japan, we even incorporate horse meat in meals. In fact, a horse sashimi plate is a very common food item. Not quite ready to try horse sashimi? Here’s a guide to some more conventional sushi!

Here’s a chart to help you learn the animals in Japanese. 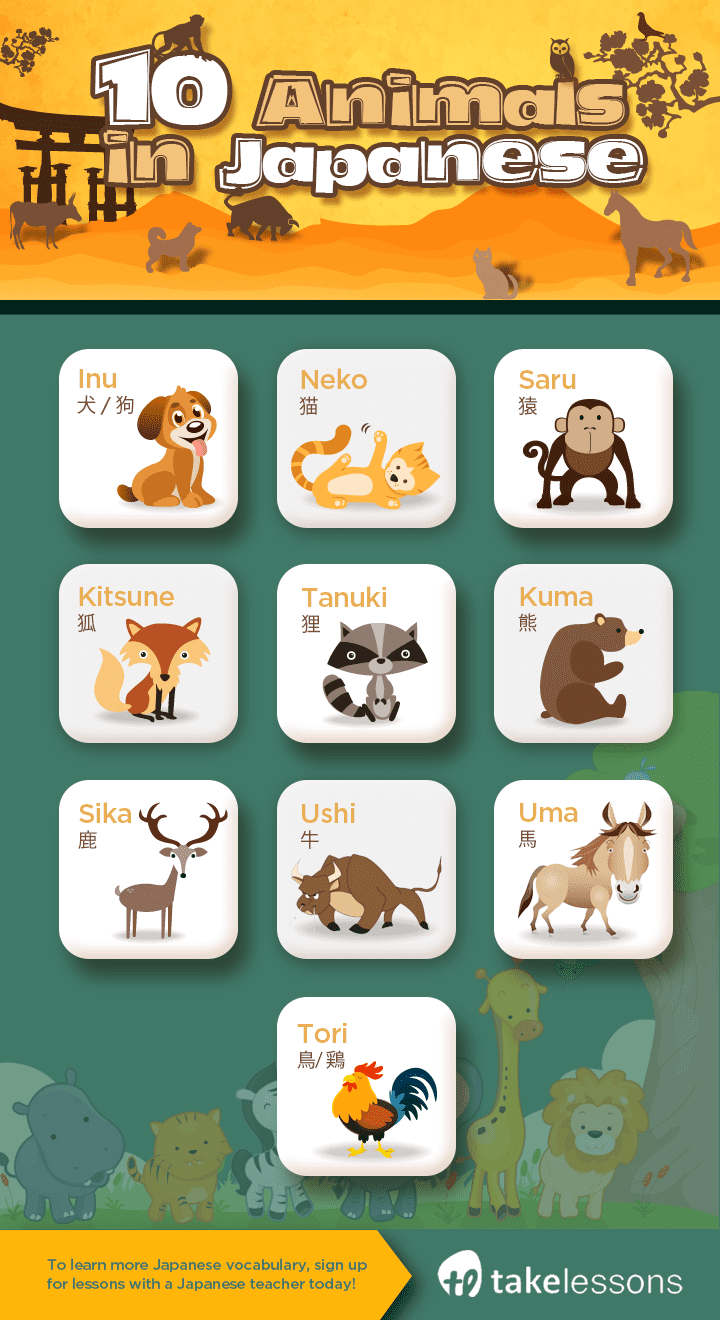 Now that you know how to say common animal names in Japanese, find out which Japanese animal you are in this fun quiz!

Post Author: Kaoru N.
Kaoru teaches Japanese, guitar, and classical guitar lessons in Brighton, MA. Originally from Tokyo, he graduated from Berklee College of Music with a dual major, and is available for in-home, in-studio, and online lessons. Learn more about Kaoru here!