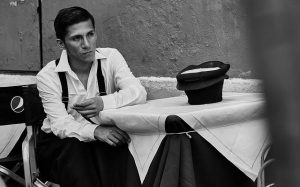 Who is your favorite actor? For the past few years, it’s been Denzel Washington, according to polls.

Count me amongst the masses! Denzel Washington is fantastic, and he’s my favorite actor, too. For decades, he’s wowed me with his dramatic prowess. The man even has the acting chops to tackle great theatrical works on Broadway, such as A Raisin in the Sun, and blew the critics away there as well. He’s played a wide variety of roles, portraying men in various time periods and from numerous walks of life. THAT’S serious acting skill.

So, it makes sense that Denzel is the Hollywood actor making the most money then, right? Wrong! Would it surprise you (or not?) to learn that the highest paid actor is in fact Dwayne Johnson, aka “The Rock”…?

According to Forbes.com, The Rock is worth an estimated 87.5 million. Yes. The same guy who was once a wrestler is making considerably (to say the least!) more than actors with formal dramatic training, and that includes Mr. Washington, who earned a BA in Drama at Fordham University and went on to do Shakespeare and additional drama studies.

Are you convinced now that your paycheck in acting has very little to do with your skill set?

And that is just one example! There are countless actors out there, some you may even be training with, that are excellent actors that will never, ever be a household name. What’s it all about? These days, marketing. Dwayne Johnson may not be super talented, but he has deals with Netflix and Under Armour. He’s also worked with Disney several times. When you are lucky enough to sign a contract with the big players, the money will follow.

Would you ever take Johnson seriously if he ever decided to tackle King Lear? Probably not. But marketing executives see that all ages like his macho yet slightly goofy persona, and as a result they are all making big money!

Needless to say, actors that will reach such financial success are few and far between. But know this: you are an actor no matter what you get paid or where you are acting! Like all things, acting should primarily be about quality rather than quantity. If you’ve done any sort of studies, meaning working with teachers or taking classes, you’re already ahead of a lot of Hollywood types that seemingly came out of nowhere and “got lucky” (yes, there truly are people like that, because they knew the right people!).

Also, have you ever done any sort of theater? Community, regional, or university? Theater also makes you a more skilled actor, without a doubt! Would you like to know the reason why most film actors don’t touch theater? That’s right. The paycheck. They think it’s beneath them because it doesn’t pay nearly enough as film work, even though they know it’s rewarding work.

A very large number of famous actors never bothered to seek formal acting training, or even take a basic acting class. Are you someone who is actively working on their craft in some way? Well, that’s another reason why you’re a serious actor. The fact that you take the time to research and learn and better yourself will set you apart from many, and hopefully grant you great opportunities. Maybe not a deal with Amazon Prime or Disney, but you must think realistically.

Skilled actors are everywhere. Don’t measure your success based on your paycheck

Skilled actors are everywhere, and many people do not know their names. Yet, these very people can star in a student film or a local theatrical production and get the respect and admiration of an audience. Don’t measure your success based on your acting paycheck! Keep in mind there are also tons of student actors not getting paid a dime, and they are already blowing people away. My parents, while attending Illinois State University, are still talking about how amazing John Malkovich was while in student productions there… Mr. Malkovich being yet another example of an excellent, trained actor who is not making a ridiculous amount of money. At least not compared to action stars!

Acting is a rewarding journey, and it can’t be measured in dollars or partnerships. When you look back on your career someday, you must ask yourself: did you enjoy the actual work you did? Respect can be earned in many places. You just have to get out there, KEEP getting out there, and find opportunities that speak to you. Sometimes, great opportunities may not pay a whole lot, but think of the valuable experience you are gaining!

And as for The Rock. Maybe I wasn’t being fair. Perhaps he will, indeed, prove me and others wrong with his King Lear.