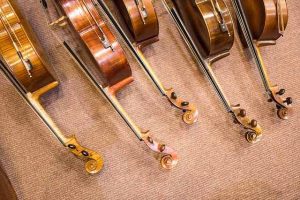 The Suzuki method, founded in 1945 by violinist Shinichi Suzuki as the Talent Education Movement, is one of the most enduring teaching methods, or pedagogies for young string players. Suzuki’s main goal for his music education system was to give students a “noble spirit,” which would instill respect and cooperation through his method.

The method was brought to America in the 1960s by John D. Kendall, and today the Suzuki Association of the Americas instructs new teachers and students in North, Central, and South America. What sets the Suzuki Method apart from other pedagogies? This article will discuss the unique strengths of the Suzuki cello method, and how it differs from traditional classical education.

The Suzuki method is intended for young students, ideally those under the age of 6. Suzuki was learning German as an adult, and realized that children learn their native language (or “mother tongue”) easily because they hear the same words repeated many times from a young age.

He developed the Suzuki Method as a kind of “mother tongue” method for classical music, in which the student would hear the music they are learning repeated many times at home. For this reason, the student’s parents play a huge part in the Suzuki method. Parents attend the lessons, and learn the music along with the students so they can encourage good practice at home.

When he was growing up, Shinichi Suzuki’s father thought that learning violin was beneath his son’s social level. Suzuki had to learn most of his music by ear from the age of 17, listening to recordings and attempting to recreate the right notes and rhythms. Just as children learn language by ear, Suzuki wanted his method to reinforce musical learning in the same way. This doesn’t mean that Suzuki cello students can’t read sheet music, only that they are taught the fundamentals on the instrument before learning to read the music.

Another pedagogy series, Essential Elements, takes the opposite approach and integrates learning to read sheet music from the start. I think the best teachers take a blended approach, and find a way to integrate reading into the Suzuki method, or more playing by ear into Essential Elements.

The Suzuki Method books have a few very short preparatory exercises, but mostly they are filled with classical music examples for the student to learn. This is a big contrast to traditional classical music education, which uses extensive books of etudes and studies such as Feuillard and Cossman. The repertoire of the Suzuki cello books uses a graded repertoire, meaning that each new piece of music has specific new challenges to overcome in order to build the technical level of the student one step at a time.

Group lessons and performances are encouraged in the Suzuki Method, which help build the positive character traits Suzuki desired for his students. By working together on the same issues students will respect their peers, knowing they also had to work to get to their musical level, as well as being compassionate to the struggles of students on other levels.

Studying classical music leads to a deeper appreciation for all of the arts, and a better understanding of what makes music beautiful. Of all the strengths of the Suzuki Method, emphasis on creating these positive character traits in students is the most profound. I really recommend Suzuki’s book on this teaching philosophy, Nurtured by Love.

Every Student Can Learn Music

By breaking down the actions of cello playing to very simple basics (so simple that a 3-year-old can learn them) the Suzuki cello method makes sure every student can learn. This is a big strength for teaching the Suzuki Method in public schools, because even if one student falls behind they will eventually be able to learn. Suzuki certified teachers take classes on specific Suzuki Method practices and earn certification for teaching according to the Method.

The Suzuki Method is structured with a graded repertoire, so it gets progressively more difficult and only introduces a small number of concepts at a time. Most classical technique books (especially collections of etudes and exercises) use each piece to develop one or two particular techniques, but in no prescribed order. Other modern books, like Essential Elements, also have graded repertoire but in a different order.

There is no definite list of repertoire, but generally classical cello teachers select solos for students according to their skill level and musical goals, then find complementary etudes to strengthen the weak points in the student’s repertoire. In this way, working one-on-one with a teacher is more specialized for the student and they can cover more specific concepts and repertoire than in a standardized system like the Suzuki cello method. No matter the method used, the most important keys to learning cello are a quality teacher and good practice.