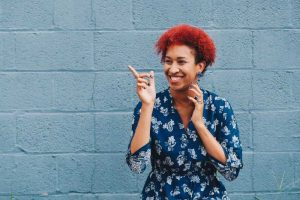 Humor makes our lives better, but can it make your Spanish better as well? Today I’m here to show you how you can increase your vocabulary and heighten your cultural awareness through jokes in Spanish.

Understanding humor in our target language is a milestone in our learning process, and my favorite kind of humor to introduce students to is wordplay. I believe wordplay in any language is one of the most charming, creative ways we can express wittiness or silliness and it’s semantics at its finest.

So today, I have selected 7 jokes in Spanish that had me cracking up while doing research for this post, and now, my challenge will be to transmit to you what makes them so funny. I will probably fail, but if you learn something, I will consider it a win!

This is a silly one. As you may already know, many adverbs in Spanish end in -mente. Such as concretamente, which translates to specifically in English.

In this joke, one person tells the other, “you’re obsessed with food”. The other person replies “no sé a qué te refieres” which is one way to say “I don’t know what you’re talking about”, except that they mistakenly say croqueta-mente. (croqueta = croquette). Thus, revealing their food obsession.

This joke has a typical setup that begins with the question: ¿Qué le dice A a B? (What did A say to B?). But this joke appeals to what is known in linguistics as assimilation. The phrase “Te echo de menos” means I miss you. However, if said fast,  “Te◡echo” will sound more like “Techo” which is also the Spanish word for roof or ceiling. So, what did a techo (roof) say to another? Techo de menos.

This joke also plays with assimilation. In the setup, someone is looking for a job. The other person replies “¿Le interesa de jardinero?”. This is an easy, shorter way to ask “Are you interested in a job as a gardener?”, except that when you say “de jardinero” (as gardener), it also sounds like the phrase “Dejar dinero” which means “To leave some money”. And so, the person gets offended: ¿Dejar dinero? (Leave money?) ¡Si lo que busco es trabajo! (Don’t you see I’m looking for a job?).

This is a classic mom-child interaction kind of joke. Here, a kid tells his mom “en el cole (which is short for colegio = school) me llaman despistado”. The verb llamar means to call, in this case, it means more precisely to call someone nicknames. The kids in school are calling him despistado, which in English means clueless, someone who’s always distracted and thus, probably making mistakes. To which the mom replies “Kid, this is not your house”.

Now, onto a dad joke…about a dad! Similar to joke #1, this joke is all about revealing the truth by mistake. A kid says to his dad “mamá dice estás obsesionado con el móvil” (that is Mom says you’re obsessed with your cell phone), to which the dad’s response is “Cállate (which means “shut up”) Alfonsiete”. We assume the kid’s name is Alfonso, and this name sounds awfully close to the word Iphone (if said fast and with a Spanish accent). But the dad says Alfon-siete = iPhone 7. Get it?

And from dad to grandpa. This is a sweet joke that talks about funny words in technology such as pestañas and the fact that these words have different meanings in different contexts. For instance, pestañas means eyelashes, but in a technological context, it means browser tab. So when the grandson asks his grandpa “Why are you sitting in front of the computer with your eyes closed? The grandpa replies “Windows asked me to close all the tabs?” as in, it asked me to close my eyelashes.

Let’s close with this simple joke that is all about homophones. That is, words that sound the same in a language but have different meanings. In this case, it’s the word muñeca. One of its meanings is doll. And it can also be used to refer to a person, often a woman,  like in Hola muñeca (Hey doll!)  Except that muñeca also means wrist in Spanish. So, in this joke, when someone says Hola muñeca, the other person replies Hola tobillo (Hey Ankle); they are alluding to the body part meaning of muñeca, by calling this person ankle. It’s also funny because we can consider a tobillo (or ankle), the lower body equivalent of a wrist. Also, this joke is not a bad comeback if you don’t want someone to call you muñeca!

So, now that I’ve broken the golden rule of never (ever) explaining a joke, let me know in the comments which of these you found most amusing.

And speaking of never ever. Here’s a little joke about Spanish speakers misusing English: 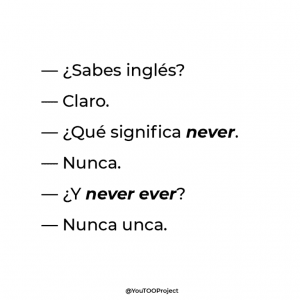