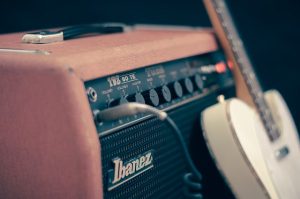 There are two main methods of recording an electric guitar at home. You can either record your guitar through an amplifier and a microphone, or you can record it using an analog to digital converter such as a DI (direct input) box, or by using both methods at the same time.

Let’s take a look at all three options.

Recording with a microphone and an amplifier

In this first option, first you need to connect your electric guitar to an amplifier. And then you will place a microphone in front of the amplifier. Most guitar players use a dynamic or condenser microphone to record, depending on the sound they like.

If you do not know where or which side of the amp the speaker is on, then you should check the user manual to see how your amp is mapped out.

Recording directly into a Direct Box or Audio Interface

The second method to record an electric guitar is to plug in your electric guitar into a DI Box (Direct Box). This method completely bypasses the amplifier. This method also does not require a microphone. This is a very different process than recording with an amplifier because now all you have is the “dry signal” from your guitar without the tone of the amp or any effects. But this doesn’t mean your recording should be dry and boring in the end.

There are various softwares that can digitally simulate amps and pedals, such as Guitar Rig, that you can use on a dry signal. By using a plug in like this, you can simulate anything from a rock amp to a jazz amp, and also add different pedals and audio effects. The results in many cases are pretty convincing, so it could be a cheaper option than having multiple amps. You would get the simulation of many amps at a fraction of the price, but I should also add that there are some sounds that are hard to replicate. So, using an amp is not completely out of the question, but the plug in option is worth exploring for experimental sounds.

A common option is to record with both a microphone and with a direct box. By mixing the signal sound of the amplifier along with the direct box, you could get interesting results. By running the direct box signal with a Guitar Rig simulation, and then mixing that signal with the actual amp recording, you could experiment with unique sounds for your guitar recording.

At the end of the day, it’s all up to your artistic choice of what kind of sound you want. Jimmy Page from Led Zeppelin is a great example of recording process. Page would sometimes record his guitars with multiple microphones in multiple distances: One microphone would be right in front of the amp, the second would be a bit further away, and the third would be a few feet away. Then, they would mix the signal of the three microphones and come up with the signature depth in Jimmy Page’s guitar sound.

This anecdote is a great example of how guitar players can experiment with microphone placement and also utilize different options. By mixing and matching different recording techniques, you can create your own signature sound. So, as a guitar player, you should experiment with different techniques and find the sound that works best for you. Most importantly, find what you like as an artist. So, go out there and try these different techniques for recording electric guitars, but most importantly have fun making your art!