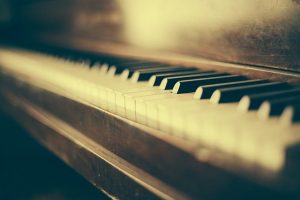 A lead sheet is a simple song arrangement that usually contains the melody line, lyrics and chord symbols. Sometimes. it may not even have a melody line and only lists the chords at the appropriate place to change them. Collections of these types of lead sheets are called “Fake Books” and contain hundreds of songs in one place. Either type is used for bands, worship teams, and other group playing that includes guitars. There are many advantages for a piano player to learn to play from a lead sheet and we will explore these as well as how to actually read the chord symbols.

First of all, reading a lead sheet teaches you creativity.  With only the bare bones to the sheet, it allows one to customize their own song and gives room to explore various options that might fit into the group and enhance the performance.  Reading from a lead sheet gives you an immense amount of understanding of how chords are made, how to move from one to another and how to analyze patterns and structure. Also, the ability to read from a lead sheet gives you a sense of accomplishment and fulfillment to be able to play with others, play along with a YouTube video or to accompany yourself.

So, How Do You Play from a Lead Sheet?

1. Start With the RH First

After you get comfortable with that, you can experiment with building chords in the LH based on the letter name.  A chord usually has 3 notes and you skip a letter, a finger and a key.  For example, if the symbol says F, then build up from there while skipping and your chord would be F-A-C (assuming you know that the music alphabet is A-G and then repeats).

If you play all three notes together then that is a block chord. If you play one note at a time, then it is a broken chord and you can get fancy with different rhythms or octaves.  You can also experiment with chord inversions.  This is when you put the bottom note up on top so in our example of the F chord, instead of F-A-C, the chord becomes A-C-F for first inversion and then C-F-A for second inversion.  If you did it one more time than you would be back to the root chord.  So every chord has a root, first inversion and second inversion.

3. Practice Playing Along With Others

At this point you could play along with a YouTube video or with a band and listen to the other parts.  That is helpful to add some rhythm to your playing by listening to the bass guitar or drums.

Sometimes you will see a small “m” after the letter name, such as Em.  This means that you need to play a minor chord.  This is formed by taking the middle note of the chord and lowering it.  So again, going back to our F chord example.  If it’s Fm, then the notes would be F, Ab, C for the root position.

If you master these basic chords and progressions, then you can try adding the letters after the slash.  What that means is that anything after the slash is the bass of the chord. So if it is F/C then C would be in the bass and you rearrange the rest of the chord and put F and A on top.

You may also see a number after the letter of the chord.  What this is referring to is the degrees of the scale (counting up from the root).  For example, if it is an F6 then it is an F chord (F-A-C) with an added note (D) which is 6 notes up from F.  Your chord now becomes a 4 note chord.  Many times though the chord is reduced back down to a three note chord by eliminating the fifth, or the C in this case.

Have fun and enjoy this new way of playing “off of the written page” of traditional music!