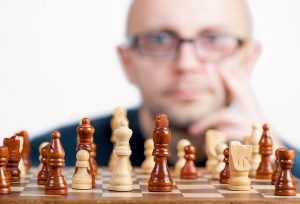 I will admit to you, the reader, that most of the articles I have written thus far assume that the reader is already a fairly avid chess player, who is aware of the basic chess rules and thus is interested in learning more advanced strategies, traps, and tricks with the goal of decisively defeating the opponent.

But, of course, not everybody is born knowing all the rules of chess—there are, in fact, many out there who are unfamiliar with the game, and need an introduction to learn chess step-by-step. Especially now that there is something of a “newbie boom” to the game at the moment. Whether it’s popular shows like The Queen’s Gambit, popular Youtube channels such as Grandmaster Nakamura’s, or the growing popularity of chess themed memes and image macros, it seems that there are many newcomers to the king’s game. 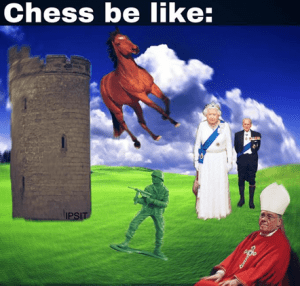 With all this being said, now is as good a time as any to write an article explaining the basic chess game rules in a concise and easily digestible way for chess beginners. Think of this as a “How to Play Chess for Beginners Guide.”

The Set Up of the Board

A chess board has 64 spaces total. The horizontal rows (or files) go 1-8. The vertical columns are notated A-H. 8×8=64. When setting up the board, remember that both sides have “white on the right” ie: both sides should have a white space on the bottom right. 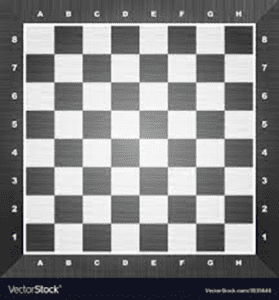 Then we have to put the pieces on the board. The second row is the easiest to set up: all of your pawns are set up on that row. The back row has what I have dubbed the “power pieces”: pieces that have a greater range of motion (and thus power) than the pawns. These are slightly trickier, but there are mnemonics that you can use to easily remember these arrangements.

The farthest left and right have rooks (the castles). Directly next to those are the knights (the horses). Think of it as “the horse lives in the castle”. Next to the knight is the bishop, and between the bishop are the king and queen (sardonically, one can remember this by remembering that, like all politicians, the king and queen desire to portray themselves as devout churchgoers).

The queen is very fashionable, and thus her clothes match the furniture (in other words, the queen matches whatever space she’s on IE: white queen on white, black queen on black). In contrast, the king is not a fashion plate, and his colors don’t match. 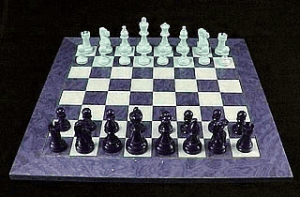 Every piece moves in its own unique way. Keep reading for the chess board rules:

The pawns move only one space forward, except for on its first move (and ONLY its first move), when it can move two spaces. The pawn captures another piece by moving in diagonals. 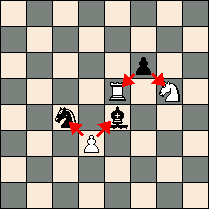 When a pawn gets to the other end of the board, it can become any other piece (except for a king). And speaking of, let’s talk about those other pieces.

The rook moves in straight lines, either up and down or side to side. 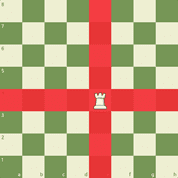 The bishop moves in diagonal lines. Note that this means that a bishop on a white square can only ever go on white squares, and ditto the black. 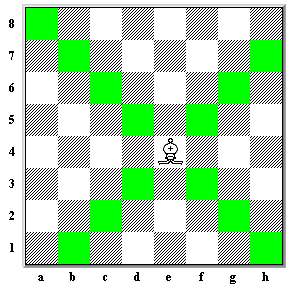 The queen is the most powerful piece, as she can move in straight OR diagonal lines. 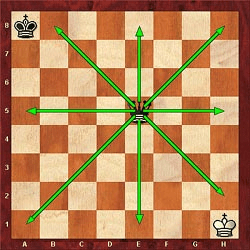 The knight moves in the shape of a letter L: two in one direction, and one perpendicular. The knight is also the only chess piece capable of jumping over another piece without capturing. 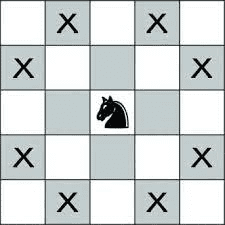 The Xs note which spaces the knight can legally move to.

The king can move one space in any direction, straight or diagonal.

This is done to “commentate” a formal game, and it’s very useful in playing chess with somebody over Zoom or other forms of correspondence. Every space has a letter and a number (see the first image). Spaces can go from A1-A8, B1-B8, and so forth until H1-H8.

When you move a piece to another space you write the letter that the piece begins with, and then the space. So, for example, the sentence “bishop moves to e5” can be simplified to “Be5”.

When a piece makes a capture, you write the letter, then an X, and then space. For example, BXe5 means “bishop moves to e5 and captures”.

Bear in mind with notation that it is based on the board as seen from the WHITE side. When playing as black, the order reverses. In other words, instead of going from A-H, 1-8, it goes from H-A, 8-1.

How to Win the Game

The game is won when the king is either captured, or is in a situation where any move would result in it being captured—this is called “checkmate”, derived from the Farsi “shah mat”, meaning “the king is dead”. 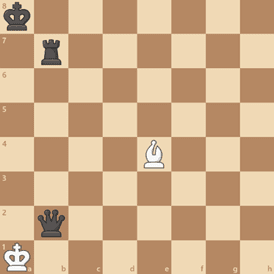 When the king is threatened (ie: could possibly be captured if it doesn’t move), this is called a “check” situation. When the king is in check, the player of the king is required by rule to make a move that will take his king out of check—in fact doing so is illegal. 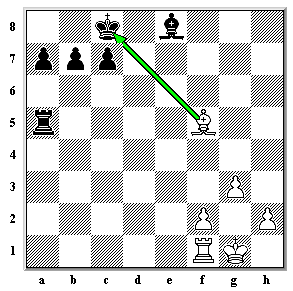 Here, the king is threatened by the white bishop, and is thus in check. His next move must be to move his king either to the left or the right, where the bishop cannot attack him. Alternatively, he can use his rook to capture the bishop and save his king.

When a move results in a check, you notate it with a “+”. For example, “queen moves to H8 and puts the king in check” would be QH8+.

And believe it or not, you have learned everything you need to play a game of chess, with an explanation that was less than 1000 words. While the rules of chess are simple to learn, the “metagame” takes a lifetime to master, and no one person can know everything about it. Now is as good a time as any to get started!