Clayton was born on May 25th, 1951 in Massachusetts. He was a deaf man, who became a notable ASL poet and linguist. Valli had quite an impressive education. He first attended the Austine School for the Deaf in Vermont in 1971.

Then he received an Associate of Applied Science in Photography from the National Technical Institute for the Deaf. After this, he received his B.A. in Social Psychology from the University of Nevada, Reno in 1978. He then went on to receive a M.A. in Linguistics from Gallaudet University in 1985. In 1993, he received his Ph.D in linguistics and ASL poetics from the Union Institute in Cincinnati, Ohio, making him the first person to achieve a doctorate in ASL poetry.

Once he finished his education, he worked as professor of linguistics and interpreting here at Gallaudet University. Valli also authored various articles and books on ASL linguistics, poetry and literature.

Transforming the World of Poetry 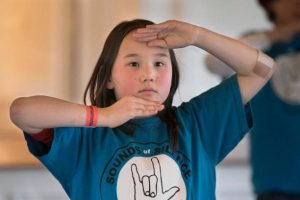 As a poet, Clayton was first to identify some features of ASL poetry, such as rhyme and meter. He linked a handshape rhyme to the concept of alliteration. He also compared rhyme in a written or spoken language poetry piece to repetition of signs or hand shapes in a visual language. And the meter or stressed/unstressed syllables within words was compared to moves of sign with ASL.

Clayton Valli compared ASL poetry versus written poetry, and felt ASL poetry has much more richness to it. He says “ASL poetry has two hands you can use to express yourself and they can both be doing separate things, which can add depth to the message that spoken poetry can’t do when you only have one tongue to use.” Since ASL is a visual language, he felt it had more parts of it that make it a vibrant form of communication. I completely agree with him as well!

Valli created poems that focused on 5 things – the use of handshape, movement, use of space, repetition, and facial expression. He often chose nature imagery to give people insight into the Deaf experience as well. Some of his several poems include: Dandelions, My Favorite Old Summer House, Mushroom, I’m Sorry, Snowflake, Hands, and Tears of Life, among many more.

Dandelions, a Poem by Clayton Valli

Let’s take a look at one of his most famous poems, Dandelions. In his poem, he uses the theme of nature to show that hearing people in the world are trying to deprive Deaf people of their language and their culture for several years. Almost as if they are trying to completely eliminate and forbid ASL. Yet, ASL continues to stand as a strong and beautiful language that cannot be replaced by anything nor will it ever be eliminated or forbidden.

In this poem, he depicts this scenario by showing an angry gardener trying to pull out the weeds from the dandelions, which represent the Deaf people. But nature still stands strong and beautiful, nothing can stop it, in the same way that ASL does.

Valli’s poems no doubt gave an impactful message. Just like this poem, among the many others he gave, he continued to raise awareness and appreciation for ASL as a language and for the movement, meter, and rhythm in ASL poetry. I personally enjoyed watching this short, yet inspiring poem. As an interpreter, I can appreciate his use of facial expressions and classifiers. Again, he conveys so much meaning with so few signs. You know that expression of “a picture is worth a thousand words?” Well I feel that this poem has a few pictures that are well worth over 10 million words.

Clayton Valli unfortunately died in 2003, yet his legacy and impact is still significant in the Deaf community nowadays. His poetry continues to be a source of education for the Deaf, students, interpreters, or simply people who love poetry. For example, his poem Dandelions, was such a great poem that many people draw towards it for inspiration, even for practice as they learn ASL. You can see online many people recreating his poem or doing their own rendition of it as well. His books have been used by many classrooms in Colleges and Universities today.

If you haven’t already looked up his poems, I recommend you do! Especially if you love learning about poetry. If you haven’t learned ASL yet, I hope Clayton Valli piqued your curiosity and encouraged you to begin learning ASL! If you are already learning, I hope he inspired you to continue learning this beautiful language!