Many of you may have seen this term “Fingerstyle Ukulele” and walked away curious. Isn’t all of ukulele music played with your fingers? And which hand does this term refer to, right or left? Well, fingerstyle ukulele refers to a particular style of playing which can be applied to any song. It primarily focuses on how you play your chords in the right hand.

Most songs are played by strumming, but this style has us plucking through the notes of a chord, string by string, with each of our individual fingers. This creates an almost“harp” like effect with the instrument, and is used in a ton in music that is more soothing – like ballads and folk music. Playing these fingerstyle ukulele patterns can be a little bit of head scratcher unless we keep a few key principles in mind.

“Marrying the Fingers to The Strings” 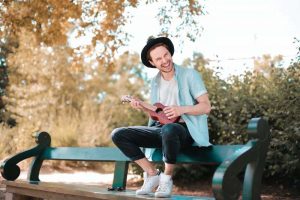 When you pluck with the thumb you will have your thumb “thumbs-up” style laid on its side and pluck downwards. For the other three fingers you will be plucking upwards, almost towards your right shoulder. You won’t be picking directly up, because that will cause unnecessary tension and resistance. Have a nice relaxed grip in the hand and pluck up and to your right with each of those three fingers.

Why “Marry” Your Fingers to the Strings?

The reason we “marry” a finger to a string is because it takes all of the thinking about where to put your fingers out of the equation. When you see a pattern where you will pluck the third string, you can rest assured that it will always be plucked with the index finger. If there is a pattern that goes from the fourth string to the first string, that will be with your thumb followed by the ring finger. I like to almost think of them as “buttons”: you see the third string and press the index finger “button” in your mind. And since that finger is “married” to the string, no more thought required.

So back to our song example, this song will be played with the following fingers in this order: thumb, index, middle, ring, middle, index. You want to make sure that all of these notes are evenly spaced rhythmically because their timing is all the same throughout.

In some cases we will be playing more complex rhythms, but to start out, most patterns are all evenly spaced beat by beat. Each chord you play, the first two being C Major and A Minor, are going to get six beats played, so that is one time through the pattern listed above. As you follow along with the rest of the chords the pattern stays the same, one time per chord change.

And this pattern is very versatile! It is used on many 6/8 ballad type tunes, and even on some faster paced songs. Ones that come to mind right off the bat are Elvis’s “I Can’t Help Falling In Love With You”, The Animal’s “House Of The Rising Sun”, Chris Stapleton’s “Tennessee Whiskey”, and even Screamin’ Jay Hawkins’s “I Put A Spell On You”.

Playing Multiple Notes At Once

Once you have each individual finger and string combination down, you can also move onto playing multiple notes at once using this technique. We may be used to strumming through chords but you can also pluck those chord notes with each of your fingers to create a more mellow sound. This is used a lot in Brazilian music, in Jazz, and in softer pieces like The Beatles’s “Blackbird”.

In some cases, like in the case of the song Blackbird, if you strum the chord you are creating in your left hand, you’ll actually end up playing some notes that are unwanted in the sound you are trying to create. Only by plucking around those notes will you be able to create the sound you are intending. That is fingerstyle ukulele’s main use in playing songs, being able to choose note by note which string you want to include.

Fingerstyle ukulele playing is one of my favorites. It’s very meditative, calming, and rewarding once you learn to “marry” your fingers to the strings. Any song can be played this way, but it is most useful with ballads and folk songs. Happy practicing!