If you’ve ever seen or heard an MTV Unplugged concert, you’ve probably seen and heard an acoustic bass guitar. This is a hollow body instrument that is the size of an acoustic guitar, but has the sound of a bass. In the 1980s and 1990s, rock bands would perform their electric guitar songs with acoustic guitars, and bassists could be heard or seen playing these instruments that are not too common in the world of music.

But if they made it all the way to the MTV screens for decades, why haven’t these low-end instruments garnered further popularity? Before we attempt to answer that question, let’s take a step back and look at how a bass instrument works.

How Does a Bass Instrument Work? 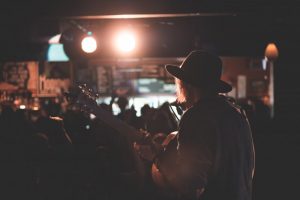 As humans, we have a hearing range of 20Hz-20,000Hz and bass frequencies only make a small portion of it. In fact, these frequencies (20-300Hz) are harder to hear for the human ear, because we tend to hear higher frequencies more easily. By comparison, the frequency range of an acoustic guitar can range from 100Hz-20,000Hz, especially on the higher end.

But, the size of an acoustic bass guitar is only a fraction of a guitarron or upright bass. It’s a smaller instrument, so it creates less sound in an acoustic setting. In a social event, you probably wouldn’t see someone pull out one of these low instruments to strum on, because you wouldn’t be able to hear anything. Whereas social events are full of the all-too-common acoustic guitar.

Acoustic bass guitars are thought to be modeled from guitarron, especially when they were first produced in the US in the 1950s. An article by Vintage Guitar Magazine traces the origins of the instrument to luthier Ernie Ball. According to this story, Ernie Ball bought a guitarron and put frets on it to prototype a new instrument, which led to his famous bass guitar, Ernie Ball Earthwood. His new invention was eventually mass produced by 1972, but  discontinued by 1985.

Between 1950s-1975, these low guitars were used by various folk bass players. Why did it become an attractive choice for folk or similar acoustic styles? These bands typically don’t have a loud bass section. Bass is solely needed as a mild low-end to create a nice contrast to the acoustic guitar, piano and vocal heavy songs. In this case, it can be argued that acoustic bass guitar can be very useful in specific music styles in terms of recording and performances in smaller, more intimate spaces.

For this reason, the instrument has to be used with an amplifier. You might be thinking, “Then what is the difference between an acoustic bass and an electric bass?”

Most of these low-end instruments come with four strings and their tuning is E-A-D-G, just like a guitar, but an octave lower. There are cases of five string acoustic basses, which add a lower B string for playing notes in lower frequencies.

But most people would either have a big upright bass that has a full sound, or a solid body electric guitar and use an amp with it. It seems that acoustic bass is ideal for those situations where we expect a less powerful bass sound, such as acoustic concerts like MTV Unplugged.