I am often asked if my violin is an antique or a vintage violin. Well, first of all, let’s define exactly what is antique or vintage. These seemingly nebulous terms do, in fact, have more precise definitions. An antique dealer, as well as the U.S. Customs Service, will tell you that the item must be at least 100 years old to be considered an antique. So today, an antique violin would have to have been made in 1921 or earlier. The word vintage is slightly more subjective though. The word itself literally means “of age”.  However, if we talk to our antique dealer again, he will tell you that the vintage violin or other object really needs to be about 40 years or older. In other words, it would have to be made around 1981 or as far back as 1921 when it then becomes an antique. 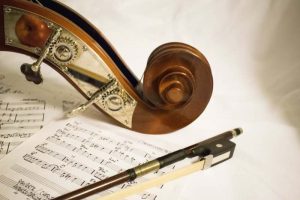 My own violin was made in France by Didier Nicolas around 1820, so it is most definitely an antique by these definitions. Many of the great violin makers we are familiar with such as Amati, Guarneri and, of course, Stradivarius were making their instruments over 300 years ago. In fact, Stradivarius’ “Golden Period”, when most of his best work was done, was between 1700-1725. There are over 600 Stradivarius instruments still in existence today and generally considered by most to be the finest ever made.

While there is no doubt that Stradivarius may represent the epitome of violin perfection, are they truly different and so much better than a modern violin? An article in the New York Times some years ago said that  “Sure, there are excellent modern violins, but convention has it that the sound of a $50,000 modern instrument cannot compare to the magic of a Stradivarius worth millions.”

I had the pleasure of playing one such violin, The Windsor-Weinstein Strad made in 1717; a wonderful instrument with a glorious tone quality. This violin is valued around $6,000,000 and is certainly the greatest violin I have ever played. It is interesting to note that many believe Stradivarius had a secret ingredient in his varnish which helped to produce the beautiful tone. Some research has been done using modern scientific technology, and we now know that in fact there was no secret ingredient; he was simply a master at using ingredients available to all.

The Old Vs. New Violin Debate & a Fascinating Experiment

The debate about old versus new has been raging for decades, and many tests have been done to try to determine if there is truly a significant difference between the million dollar Strads and modern violins. One such test took place in Paris, France in 2014. 10 professional violinists were blindfolded and asked to play 12 different violins split evenly between old and new and the test included 5 Stradivarius violins and a Guarneri del Gesu from 1740.

They all played every instrument firstly in a small rehearsal room. Then, the same players evaluated the same instruments in a concert hall and then finally played them again with full orchestral accompaniment. There was a small audience made up of violin makers, other musicians and critics. Each soloist had been asked to imagine they had to replace their own violin and were about to head off on a concert tour.  The results were quite surprising.  Six of them actually chose new, modern violins over the old masters. In fact, as a group, they did no better than simple pot luck when picking old from new. Interestingly, most of them felt that it was the new violins that were more immediately playable.

Of course, tests like this that weigh the sound of a vintage violin against the sound of a newer model are not new and certainly not infallible. Some of the players suggested that this type of test cannot take into account the months it may take for a violin and player to acclimatize to each other. There was also a suggestion that perhaps some of the old violins were not top quality. On the other hand, perhaps it also suggests that modern day violin makers may be just as skilled as the great masters such as Stradivarius and Guarneri.

So, what is the final word on this subject? In truth, there is no final word and the debate will continue to rage on. My guess is that most violinists still favor the belief that the old masters are the greatest. After all, I haven’t heard of any great soloist who is planning on trading in his or her Strad or Guarneri for a modern violin.