As a beginner I often told myself I would know I am a really great cellist when I could play Rimsky-Korsakov’s Flight of the Bumblebee at full speed. To my young ears, this simply had to be one of the hardest cello pieces with its high range, chromaticism, and famously fast tempo. As my musical career continued I worked on these and other skills to reach a point I could begin learning the piece confidently, and it was only a matter of time before I achieved my goal.

Of course, this wasn’t the end. There were still higher peaks to climb, and more difficult pieces to learn if I wanted to make it as a professional cellist. I grew out of the idea that there was one piece I could learn which would make me a great cellist, realizing there is a wide skill set needed to play more difficult pieces. This article will explain how to look at difficult cello music and how to overcome the challenges of your hardest cello pieces.

Why is this so hard? 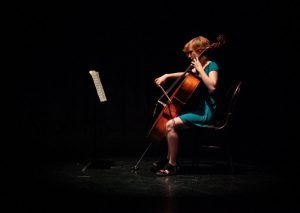 Flight of the Bumblebee seemed extremely difficult as a beginner, but now that I have learned it I realize it is really pretty simplistic from a technical standpoint. I don’t mean to say it’s an easy piece, but the reasons for its difficulty weren’t as challenging as I first thought. Although it is highly chromatic, there are repeating patterns. Even though the range is very wide, it generally moves step-wise between the positions. The most difficult thing about it is the tempo, and all it takes to master tempo is good metronome practice. I came to realize Flight of the Bumblebee wasn’t as hard as it sounded, which is part of why this piece is so famous; this category of solo is meant to sound hard without being terribly difficult.

Other pieces are difficult because they require extreme concentration, such as the fifth movement of Messiaen’s Quartet for the End of Time with its tempo marking, “infinitely slow.” Compared to the flashy solos like Rimsky-Korsakov’s, slow pieces are hard because they are more exposed. If you miss a note in a fast piece, then it’s done and you can move forward. But if each note can last 30 seconds, then the mistake is very obvious.

The hardest fast cello piece, according to many professional cellists I have asked, is Prokofiev’s Sinfonia Concertante, Op. 125, and in particular the second movement for its technical demands, and the endurance needed. There are virtually no resting points, so from start to finish this concerto is exhausting.

Some of the hardest cello pieces are only difficult because they are poorly written for the instrument, or for another instrument entirely such as Bach’s Sixth Suite written for five-stringed cello. If a cello piece seems to work well on the instrument you can say it is written idiomatically. Composers who are also experienced cellists naturally write some of the best cello music. Boccherini’s music is difficult because it explores advanced techniques and demanding intonation; Haydn’s solos (especially the Concerto in D Major) is difficult because it would really work better on a violin.

After some analysis and metronome practice Flight of the Bumblebee moved down a few pegs on my personal difficulty scale. As a beginner, I might have thought it was impossible. As an intermediate cellist, I was too intimidated by its perceived difficulty to even attempt to learn it. But once I started learning it in college, I was well above the level needed. No matter how hard a piece might seem at first, you can overcome it with hard work and regular practice.

Most pedagogues break down cello technique into three stages: beginner, intermediate, and advanced. These are very general labels with no rules on which techniques belong to each stage, because what is easy for one student might be difficult for another.

For example, one beginner cellist might have piano experience and won’t need to learn to read the sheet music so they can focus on technical challenges like posture and bow hold. An intermediate cellist might have great posture, but need to work on their rhythm. Even attempting to measure the stages by the technical demands in the repertoire isn’t reliable. Take the book Solos for the Intermediate Cellist, for example; the hardest solo in the collection isn’t as difficult as anything in Suzuki Book 3, which is considered an “advanced beginner” level.

You shouldn’t take a difficulty label as fact when it comes to the hard repertoire you want to learn. Instead analyze what makes the piece difficult, and come up with a practice strategy that helps you tackle those challenges. Even the hardest cello pieces are in your grasp with good practice and dedication.