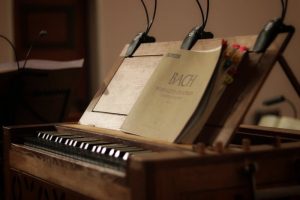 The history of music is a history of aesthetics and trends throughout the centuries. Music follows in the footsteps of the other arts – literature, painting, and architecture – and is usually a result of changes in society that stem from the changing ideas of philosophers, politicians, church, and other leading factors in society.

This article aims to provide the beginner musician a nutshell overview of the different periods in music history by discussing the type of music and aesthetics of each period, along with the major composers associated with them. Understanding what makes each period unique is important to our performance of music from each respective era, just as one should aim to play jazz like jazz and classical like classical. Being able to create a diverse body of repertoire and styles is part of any musician’s task.

The Medieval Period is the first period to have a substantial music repertoire, albeit mostly liturgical vocal music for church. This period spans from the Fall of Rome (476 A.D.) to the Renaissance Period (1500s). During this time, music was passed down aurally, transmitted through memorization rather than written down. There was no universal musical notation. Hence, it was only around the 900s that the church musicians finally began to create a system of musical notation, leading to the preservation of church music starting around this time. Secular music (or music outside the church) was still transmitted aurally as the ability to write was only taught to church scholars.

The vocal music of this period, known as Gregorian chant, range from single vocal lines to pieces of 3-4 layers (known as motets). Musicians used modal scales rather than the major and minor scales of the present day, which meant music that sounds odd to our ears. Imagine the chant of monks when thinking of this type of music. The beauty of it lies in the simplicity and interesting intervals created by the modal scales. Important composers during this period include Leoninus and Perotinus for Gregorian chant, and Guillaume da Machaut in the 1300s.

The Enlightenment in philosophy led to the period known as the Renaissance. The dates of this period is usually earlier in other art forms (literature and painting), and the dates for music range from the 1400s to 1600s. During this time, the texture in music becomes increasingly expanded due to the standardized notation of music, which allowed both liturgical (church) and secular (outside church) music to be passed down. Additionally, the ability to notate and recreate music as originally performed meant that music could be shared across borders, allowing a more international mix of musical styles.

The interest in music theory expanded during this period, leading to counterpoint and music theory books that set the standard for how music was written or should sound during this period. Musicians focused on creating layers in voices that sounded beautiful and pure, with clear text declamation. Later composers of the 1600s and early 1700s began to explore more dissonant-sounding intervals and chromaticism. Names that should be explored include the Josquin Des Prez, William Byrd, and Giovanni Palestrina.

The Baroque Period is where opera and instrumental music begin to take over the musical scene. The creation of opera – a combination of music, scenery, and acting with a clear storyline – was all the rage and was the ultimate form of music. All music trends that followed took their cue from opera, such as the varied styles of aria and recitative.

The other musical genre that arose during the Baroque Period was that of instrumental music. Spurred by the need for dance music at political courts or liturgical music during church services, instrumental music began to gain importance as regular citizens began making music in the home setting. The increasingly international scene meant that Western composers took the best of each culture, leading to the diverse, monumental, and spiritual music of Johann Sebastian Bach. Other important keyboard composers of this period include Friedrich Handel, Jean-Philippe Rameau, and Domenico Scarlatti. Other important composers in the instrumental and operatic genres include Handel, Antonio Vivaldi, Claudio Monteverdi, and Arcangelo Corelli.

Bach Mass in B minor:

A period of elegance and poise, the Classical Period is in direct opposition to the dramatic force of Baroque music. Refinement was the goal of Classical Period music, with music that caters towards the happy and whimsical. Music of this time leans towards simplicity and transparency of music, wanting to attract popular taste immediately. The three famous composers of this period are Franz Joseph Haydn, Wolfgang Amadeus Mozart, and Ludwig van Beethoven.

The Romantic Period is again in opposition to the Classical Period refinement by exploring the epic and dramatic side of human emotions. Here, composers are not afraid to explore tragedy, despair, love, and death – subjects that were not acceptable in the Classical Period. As a result, the music of this period is full of emotion and are usually the most popular due to their immediate appeal to human nature.

The end date for the Romantic Period is unclear, as aesthetics and styles become mixed and transformed into many different branches as the 20th century rolls around. Famous composers of this period include Franz Liszt, Frédéric Chopin, Johannes Brahms, Richard Wagner, Gustav Mahler, and Sergei Rachmaninoff – a list that barely cracks the tip of the iceberg. There are so many unique composers in this period to be explored and appreciated.

The Impressionistic Period was a short span covering the late 1800s and early 1900s, mainly in the works of two composers, Debussy and Ravel. This term is taken from the style of painting in connection to Monet, where shapes and colors are blurred together to create a dreamlike image. When translated to the music of Debussy and Ravel, we get music that aims to explore the beauty of sound itself, without the need for emotional baggage or purpose. The music of this period is full of color and imagery, aiming to create a dreamlike world filled with endless color.

7) The Contemporary/Modern Period (1920s to present)

The Modern Period consists of a wide range of styles within itself, as the sheer variety in modern life contributes to the diversity of directions classical music has taken. These directions include atonality led by Arnold Schoenberg, electronic music by Milton Babbitt, experimental music by John Cage, minimalism by Steve Reich, tintinnabuli by Arvo Pärt, and neo-classic and neo-romantic music in the later half of the 1900s. Although history may be too close to tell which of the modern styles will end of being most influential or important, the wide variety of stylistic options is a reaction to the plethora of ideas and aesthetics in the modern time.

Understanding how your pieces fit into the history of music is important in bringing out the stylistic features of the work and the aesthetics of the composer. Listen to a wide range of music by the same composer and composers of the same time period to get a sense of the world in which these composers’ lived.