Violins as we know them today really started to evolve from the 16th century. In fact, Andrea Amati, the patriarch of that violin making family, was born in 1505, although it wasn’t until 1555 that he created his first violin at the request of an Italian statesman by the name of Lorenzo De’ Medici.

By the end of the century, his grandson, Nicolo, had been born and it was he who would eventually become the most eminent member of the family. They hailed from Cremona, a city in the north of Italy. This was also the birthplace of two other great masters of violin making, Antonio Stradivarius and Giuseppe “del Gesù” Guarneri. Violins continued to develop and improve and by the early 1700s we had reached what is known as the “Golden Period” of Stradivarius. 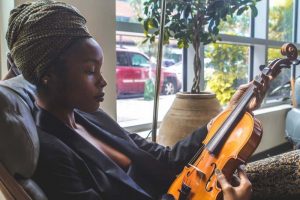 Around about the same time in history we see the rise of the violin making industry in France. French violins are actually made in exactly the same way at Italian violins, as are German violins as well as English violins etc.

The process begins by selecting the wood. Maple is typically used for the back, ribs and neck, while Spruce is the wood of choice for the top.  Spruce is a softer wood than Maple, so will vibrate more readily. It also helps if the wood has aged, perhaps by as much as twenty years.

The violin maker, or luthier, will select a mold to form the shape of the violin. Molds are often copies of the old masters such as the aforementioned Stradivarius or Guarneri. The individual elements of the violin such the top, back, ribs, neck and scroll are then gouged or carved out from the wood.

They are held together with glue before finishing with a varnish. Incidentally, many people have theorized that the varnish was, in fact, the secret to the success of Stradivarius. Modern scientific technology has given us the ability to put this theory to the test. Sadly, it has proven there is no secret; he was simply a master of his craft.

The Growth of the Violin Making Industry in France

While Stradivarius, Guarneri and Amati were plying their trade in Cremona, a number of luthiers were making a reputation for themselves in Mirecourt, France. Mirecourt is situated close to the River Madon in the north east of the country.

The exact date of the start of the violin making industry is unclear but, we do know that throughout the 1600s there may have been as many as fifty luthiers in the city. By the time we get to 1732, a guild had been formed in order to maintain high levels of training and quality workmanship.  As a result, many skilled craftsmen were produced and this enabled Mirecourt to become not only a wealthy city but also a rival to Cremona.

French Violins in the 19th Century

As we move into the 19th century, French violin making continued to improve on it’s already burgeoning reputation. One of the greatest violin makers of all time was Jean Baptiste Vuillaume. He was born in Mirecourt in 1798 and eventually established  a reputation equal to that of Stradivarius and Guarneri. Mirecourt is about 100 miles from Paris and, inevitably, many luthiers, including Villaume moved to open workshops there. Villaume’s workshop went from strength to strength, and within a couple of decades it was not only the most influential in Paris, but in the whole of Europe.

He was, naturally, inspired by the Italian masters. Often, some of the Italian violins would pass through his workshop and he would use the opportunity to make accurate measurements of their dimensions. He would then go on to make very accurate copies of these instruments. One such instrument is “Il Cannone”, a violin made by Guarneri and owned by the great violinist Nicolo Paganini. Legend has it that not even Paganini himself could tell the difference between looking at the Villaume copy and the original.

However, he was, apparently, able to differentiate between the very subtle differences in tone quality.  The original by Guarneri is currently exhibited in the town hall in Genoa, Italy. The copy is now owned by American violinist Hilary Hahn. In fact, she owns two Villaume violins, the other being a copy of a Stradivarius.

Of course, Villaume wasn’t the only famous maker to come out of Mirecourt; others include Gand, Chanot, Chardon, Bernardel, Peccatte, Voirin, Vatelot, Collin-Mezin and Nicolas Lupot. Although Lupot was indeed born in Mirecourt, he actually spent his childhood in Stuttgart, Germany. It wasn’t until his adult years did he move back to France and set up a workshop in Paris. His work was of such high quality that he is sometimes referred to as the “French Stradivarius”.

A Personal Connection With the Luthiers of Mirecourt

I am proud to say that my own violin was made by one of the great luthiers in Mirecourt; Didier Nicolas. He lived from 1757 to 1833 and my violin was made around 1820. It is typical of the French style, in as much as it has a very direct and dominant sound that would be ideal for a soloist. Although my own career path did not take me to quite such elevated heights, I have no doubt that the quality of my violin played an important role in allowing me to perform with a number of world class orchestras.

Although the old Italian masters are probably regarded by many as “creme de la creme”, in my honest opinion, top quality French violins deserve to be feted and revered equally.