Sometimes learning a language feels impossible, but don’t despair! There are many examples of other people, even celebrities, who boast proficiency in two or more languages. It can be a great motivator for your own learning to hear their success stories.

Celebrities might feel out of touch to some of us, but they also have to put in the same work to learn another language, and some of them have had great success! To give yourself a boost and inspire your learning, here are a few famous celebrities who successfully speak the French language. 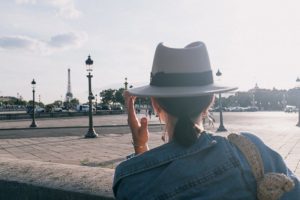 Jodie Foster is not only a well-respected Hollywood actress, but her French is almost impeccable. She started early by going to a French immersion school and continues to use it in her everyday life. She has even recorded songs in French, and acted in several French language films. Of course, all the time she has spent in France has also helped keep her French language skills up to snuff, as you can see here.

Jane Fonda is not just a beloved actress and climate change activist; she also speaks very good French. Unlike Jodie Foster, she perfected her French later in life during her marriage to Roger Vadim, a French director. She was working on her acting career in France, but struggled with the language, and their relationship really helped her improve. They do say that love is one of the best ways to learn a language. Jane Fonda is proof that you can learn French as an adult, just listen to her.

Bradley Cooper makes speaking French look good and sound even better. He started learning the language during his university days, and one of the keys to his success was spending time immersed in the French culture in Aix-en-Provence. He didn’t let his skills get rusty after finishing his degree, and continues to consistently spend part of his time in France. Immersion is key to language improvement, as well as continued practice. He sure looks good and sounds better while he does it. If you manage to make locals laugh, you know you’re a hit.

Joseph Gordon-Levitt became a self-professed Francophile while studying at Columbia University. He took courses in French poetry and has never looked back. He worked hard to perfect it, especially motivated by playing a French man in the movie, The Walk. Joseph makes it look effortless and should be an inspiration for your learning journey.

Kristin might even give Jodie Foster a run for her money. There are some slight differences in their accents, but both women have had success in both English and French language films. Kristin is British, but spent more than 15 years in Paris raising her children with her former French husband. Of course, her French must have already been good as she studied at ENSATT in Paris as a young woman and worked in France as an au pair. You can tell she feels right at home speaking the language.

He might have won hearts with his British accent in his famous romantic comedies, but Hugh Grant can also charm you quite successfully in French. Having to learn French from his French teacher mother might not have been fun as a child, but he is luckily able to use it now to charm his French interviewers, even if he does not speak it perfectly! While perfection might not exist, a smile and positive outlook will take you a long way in your French classes.

He might be quite a controversial figure now in Hollywood, but he once was just living a family life, in France, with his French partner, Vanessa Paradis. They raised their two children there, and he was faced with the reality of having to learn the language to best enjoy living in the country. While his relationship ended and his career might not be flourishing, the French language will stay with him, a positive reminder of what living abroad can give you.

Her mother was half French and half Spanish, and Helena Bonham Carter speaks French proficiently enough to have starred in a French film! Check out her language skills here. Tim Burton’s muse could also become your French language motivation.

Not only is she beloved as Hermione, but she is also accomplished in the French language. Emma spent some of her childhood in France and continues to speak the language well. Where do her talents end?

The beloved child actor who has managed to keep his career going strong as an adult also is an impressive polyglot! Freddie learned French as a child, and continues to speak it, along with Spanish and Arabic. Quite an accomplishment and something to inspire us all.

You Can Also Learn French – at Any Point in Your Life

Learning French should not feel impossible. As you can see from some of these celebrities, some started young, or were born in the country, but others successfully put in time and effort when they were older. It is always possible to learn to speak a language.

Focus on creating a need that pushes you to practice continually, and, if you can, take a page out of their books and spend some time immersing yourself in French culture in a French-speaking country! Our expert French language instructors are here to guide you every step of the way and continue to inspire you as you work towards French proficiency.