Humor is one of those concepts that is impossible to translate literally. So much more depends on the jokes told than the mere words used. Nuances and cultural context add invisible layers that can trip non-native speakers up. In the past, when I watched humoristes (comedians) with my family and even when I understood the words, often, the punchline fell flat. I’d sit there wondering how those around me were giggling. As time passed, I began to find myself also amused as opposed to bewildered.

When you find yourself laughing at a French joke, you can feel proud of the accomplishment and secure in the knowledge that you have truly learned the language and its culture. In the meantime, here are some jokes that might lend you some insight into the French mentality, and thus, its humor. Regardless, hopefully a few of these French jokes make you smile, if not laugh.

A Closer Look at Some French Jokes 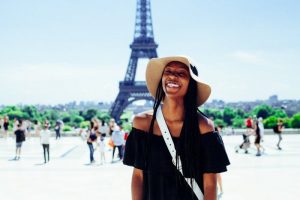 Who hasn’t begged their parents for ice cream? Points to this precocious French boy for at least attempting to appeal to his father’s empathetic side and twist buying ice cream into doing a good deed!

Don’t overthink some jokes. The French have a flair for absurdity and wry humor that sometimes sounds just silly enough. Hint: the answer might make you roll your eyes and shake your head, it’s so obvious and groan-worthy.

A French Joke for Alphabet Practice

This play on words will help you not only practice your French alphabet, but review or learn a new word! Remember to read it out loud and pronounce the alphabet in French to get the French joke! Don’t forget that the French word for “aged/old” is âgé.

A pressing dilemma for some is amusement for others. If you’re in a hurry, the phrase être pressé will serve you well, as it means pressed for time. Of course, as English also has borrowed many words from French, presser is “press”. This fruit maman is clearly worried about the well-being of her yellow, round babies being rushed to an unfortunately pressé ending.

A Joke to Demonstrate French Sarcasm

French people are smart alecks and sarcastic, and their French jokes can reflect this often. Sarcasm is shared by the young and old in France, even present in small children, as the poor teacher in this following joke is soon to discover.

A Final French Joke for the Day

I think you could guess that many languages enjoy poking fun at delusions, and the occasional therapy session is also a target for a French joke. Exaggerating  everyday situations is something that the French enjoy doing, especially if they can point out potentially silly situations in a clever way.

This list is by no means exhaustive nor fully representative of the types of French jokes that you can come across, but hopefully you have enjoyed them and learned a few useful new words, as well as gained a deeper understanding of what French people consider funny.

Jokes are really useful not just for your own entertainment, but also in ice breaker situations, and push you to delve deeper into French culture. Watching French TV series is a great way to be exposed to casual French conversation and humor, and our experienced French language instructors are also right here at your disposal to assist in your language learning process!