Patternmaking for most beginners seems mysterious and intimidating. It is a subject a lot of sewists try to avoid. As a professional working in the fashion industry for more than a decade, I had the same fear as many of you. It took lots of trial and perseverance to overcome challenges, and carve out a successful career.

The First Step is to Make Mistakes! 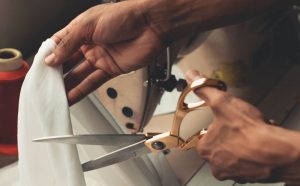 Many of my students are worried about making mistakes. They want to be sure every step they take is correct. Multiple attempts and failures is a normal process of learning pattern and garment construction. I still remember the first time I learned how to fit a pair of pants. It took me three times to fully disassemble and reassemble the pants. However, by going through the process, I finally understood how to correct the pattern.

No one can make a perfect pattern in just one shot. Even though I have been making patterns for over 20 years, I still need to take time for multiple corrections. The more mistakes you make, the more you learn.

Most of the teachers separate patternmaking as an individual subject. To me, draping, pattern making, and sewing are inseparable. You can’t single out any of these. For beginners, the best way to learn patternmaking is actually through sewing.

1. Start by Learning to Sew

Sewing is the fastest way to understand the connection between patterns and garment construction. You get to see the full picture of how it works through reading the patterns, cutting fabrics, and sewing together.

If you jump right in patternmaking without any prior sewing experience, you might get confused very quickly.

The next stage will be alterations. Alteration is an efficient way for you to learn how to fit and make pattern corrections. You can start by altering your own clothes.

If you are worried about ruining your clothes, Goodwill is an excellent choice for this practice. When you put on a piece of clothing, you need to take a good look at the fit and evaluate why you don’t like it. Maybe it’s because the armhole is too big, the shoulder is too broad, or the leg is not skinny enough. Don’t worry about whether it is the right or wrong way to alter as long as the outcome looks the way you want.

The experience you gain from alterations will help to have a better understanding of your own body proportion. Sewing and alteration lay a solid foundation to start with Patternmaking. Without doing so, it will be quite challenging to start patternmaking.

In schools, patternmaking and draping classes are the curricula for the sophomore year. The students I have taught who ultimately succeed in Patternmaking have usually already been sewing for a while. They know what they don’t know.

How to Get Started

Most people think patternmaking is very technical, formula heavy, and rigid with rules. That’s because they don’t see patternmaking and draping as a whole. Both subjects are closely related to one another. Patternmaking is the result of draping, and it is to translate a 3-dimensional garment onto a 2-dimensional paper.

You need to learn these skills side by side and look at them as one.

Start with a few good patternmaking and draping books. When going through the books, don’t just take in all the formulas and rules without knowing why. There is always a reason behind each system. If you understand the principle and concept, you can use each freely and apply it without difficulties. Experimenting is crucial to patternmaking.

I always tell my students there are a lot of different approaches to the problem. As long as you can fix the problem, that is the answer. There is no right or wrong. Being bold, and experimenting with different solutions is the most critical way to approach patternmaking. The best students I have are the ones willing to try on their own.

I have come across many students who believe that the only way to learn how to make a pattern is to go to fashion school. However, you don’t need to go to fashion school to learn this useful skill. Schools teach the essential knowledge, and it’s up to you to advance your skills. I learned mostly from my own mistakes and experiments. If you’re looking to learn patternmaking for beginners, the best option is to be bold, creative, and have fun!