Are you considering a new ukulele, and wondering the difference is between an acacia vs. koa ukulele? It’s no secret that there are many factors to consider when shopping for a ukulele, and the choices can be overwhelming for beginner musicians.

For starters, not only are there different size ukuleles, (soprano, concert, tenor, and baritone), but there are a wide variety of brands and styles to choose from as well. Should you get a solid wood? A solid top only? A laminate? And of course, you have to consider the tonewoods! (koa, mahogany, acacia, mango, etc.)

Tackling all these specific factors to consider could be a topic for a separate blog post entirely. However, in this article, we are just going to compare two popular ukulele woods, koa and acacia.

What is the Difference Between Acacia and Koa? 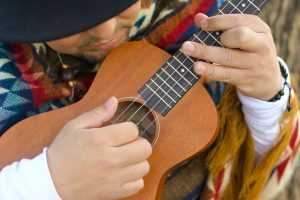 As you’re shopping for a ukulele for your lessons, you might be confused when you see “acacia” and “koa” listed as different types of wood – after all koa is a type of acacia! However, there are some differences, including:

Ultimately, you’ll find that acacia and pure koa are quite similar, especially in regard to tuning. Here’s more information:

What to Consider When Choosing Ukulele Tonewood 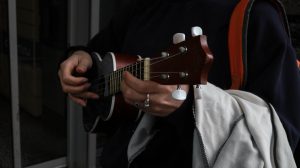 Regardless of whether you choose acacia vs. koa ukulele, when you’re shopping for a ukulele, you’ll see the word “tonewood” come up a lot. Although this sounds complex, it’s basically just the type of wood that is used in the construction of an instrument specifically to impart certain characteristics to the ukulele’s sound.

Wood choice, especially for the many types of ukuleles, can be huge. It will give you a certain type of sound and while you can choose a ukulele that is made out of different types of tonewoods, most are constructed with just one.

Of them, acacia and koa are some of the best. Let’s take a deeper dive to help you make a decision! 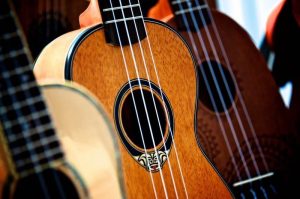 The first thing to know is that acacia wood and koa wood are very similar. In fact, acacia is in the same family as koa and sometimes when shopping for an acacia wood ukulele, you will see it called “koa acacia.” There are about 1300 different kinds of acacia wood!

According to hunker.com, “Acacia is a hardwood harvested from trees 60 to 100 feet in height native to Australia and Hawaii. It also grows as thorny shrubbery in temperate and tropical climates. Smaller varieties of acacia are typically not used as lumber sources.” Australian blackwood is a more abundant acacia wood than koa and can be used in guitars and ukuleles.

Hawaiian Koa wood, on the other hand, is only found in Hawaii. Koa literally means “warrior” and has been used in weapons of war for generations. The Hawaiian natives and government are very careful to preserve and care for Koa wood trees, so, thankfully, there is more Koa now than even 10 or 20 years ago. Regardless, because KOA is a protected and treasured tree species specific to the island of Hawaii, it costs significantly more to manufacture ukuleles and other string instruments using solid KOA than with other varieties of wood.

Therefore, innovative ukulele manufacturers started to produce ukuleles using woods from the koa family, but not pure Koa wood. This is where acacia wood comes in. It is far more abundant and thus more affordable. Because it comes from the same family as Koa wood, it has a similar sound and style, although differences can be observed when played back to back by a musically sensitive ear.

The Sound for Acacia Ukulele vs Koa

Of course, tone and sound are always a matter of personal preference, so you should always listen for yourself to compare the difference. Very little with instruments (and music in general!) is objective in nature- it is always a matter of preference and your particular style! You may find that you like the sound of the acacia wood ukuleles better.

If you are interested in a  detailed sound and appearance comparison between the two different kinds of ukuleles, you can check out this YouTube video and see what you think! Be sure to let me know which you liked best in the comments below:

So now that we’ve covered sound and appearance a bit, let’s talk about the price tag for each of these instruments. Let’s be honest, affordability is probably the deciding factor for many of us! As I mentioned earlier, KOA wood is native only to Hawaii and thus is more expensive than other kinds of wood used for ukuleles.

Is Acacia Wood Good For Ukuleles? 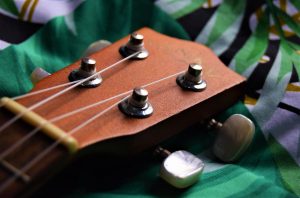 Acacia wood is a great choice for tonewood. It is harvested from trees native to Australia and Hawaii and since it’s not as specific as koa acacia, it may be easier to find ukuleles made out of acacia than out of koa.

This might mean your ukulele is also more affordable.

When compared side by side, it’s tough to find a difference between koa and acacia ukuleles. But what about compared to other options?

Spruce has a much lighter, brighter sound than acacia. It’s also easier to find, so you may find that the ukulele is less expensive as a result. It doesn’t offer quite the same aesthetic, though.

If you’re looking for a wood that is warm and soft, mahogany is the way to go. It is best for mid-ranges and frequencies and it is also quite strong. That’s why mahogany is used in the construction of many other types of instruments too.

Mahogany is frequently used in combination with acacia, incorporated as part of the neck or other pieces of the ukulele even if not used for the entire instrument. As a hardwood, it’s not as soft as cedar, spruce, or other woods.

It’s also one of the most aesthetically pleasing woods!

Acacia has a sound that is fuller and louder, but mahogany produces a warmer tone. Both are quite beautiful to look at!

Is Koa Wood Good for Ukuleles? 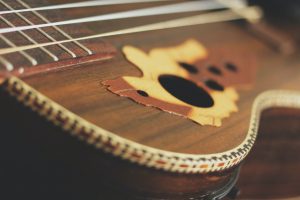 As you may have guessed from the information above, koa is one of the best kinds of wood you can find in a high-quality ukulele. It lends a bright tone to your playing while also creating an instrument that is lightweight and beautiful to look at.

But what about compared to other types of tonewood?

It sounds similar to koa in that it is warm and deep. It has a sonic clarity and has quite a good mid-range.

Maple is often used in the production of budget ukuleles. As a dense hardwood, you’ll find that the notes don’t sustain as long and decay a bit faster.

That said, maple also lends a brighter tone to the songs and allows them to project. If you’re looking for your individual notes to separate well without blurring together, maple is a great choice for this category, too.

When compared to mahogany, koa ukuleles tend to have a higher-pitched, tighter sound to them, though not quite as high and tight as other types of acacia.

Both woods have a similar density, though you’ll likely find that the mahogany is slightly lighter in weight (you may not even notice the difference).

Ultimately, mahogany, koa, and other types of acacia are all great choices as you are shopping for a ukulele. 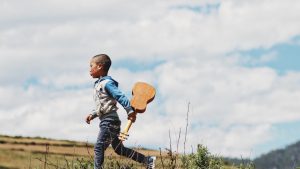 There are a few other tips to keep in mind as you’re shopping for a ukulele.

Size is one of the most important variables to consider as you’re looking for a ukulele. These include soprano, concert, tenor, and baritone. As your ukulele gets bigger, the sound gets deeper (so a baritone will have a deeper sound and a larger size than a soprano, which is the smallest).

The best ukulele size for beginners is either a soprano or a concert size. These instruments are easier to handle and easier to tune.

Most ukulele strings are made out of nylon or nylgut. This provides the bright sound that the ukulele is famous for. There are some that are made out of metal but these should be avoided, since they lend a sharper sound.

Rarely, you might find strings made out of gut, or sheep skin. This can grow loose in a short period of time but also lends an authentic feel to the instrument.

Many people choose to get a gloss on their instruments. This can make a ukulele look really great, but it does have a tendency to muffle the sound a bit.

It’s also easy to leave fingerprints all over the gloss, which can be harder to clean.

A satin finish allows sound to resonate a bit better and can also help protect the ukulele from damage. 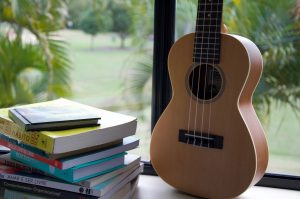 So, now that you have more information on acacia vs. koa ukulele makes, how do you decide which instrument you should purchase? Ultimately, it depends on what you are looking for. If you are an amateur player who is looking for a nice quality instrument that doesn’t break the bank, a solid acacia wood ukulele is a wonderful instrument with an amazing tone.

The average person probably does not need to shell out the extra money for a KOA ukulele unless you are hoping for a genuine Hawaiian instrument and are a professional player. There is no doubt that both are incredible instruments. Happy strumming!