The Grateful Dead had a lot of influences come together from each band member to create a musical sort of quilt. They played everything from free jazz to country and bluegrass to folk and rock. Their influence is still felt throughout the musical landscape today with bands like Phish and Dave Matthews Band. 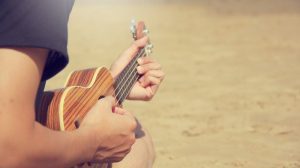 They also help create a whole new trajectory for an entire genre, Bluegrass by capturing that audience with traditional tunes and playing them through their own unique rock band filter while bringing in influences of jazz and even world music. It is hard to overstate the influence of The Grateful Dead, and many articles have been written about what makes their music unique and influential.

It may surprise you to learn that when you peer into the musical aspects of their songs, The Grateful Dead did not write very complicated material. Instead, they relied on more simple chords and harmonies in order to put the focus on the lyrics and melody and leave room in the song to improvise and create more melodic ideas. This is why playing Grateful Dead songs on the ukulele can be reduced down to a mere 5 chords.

In this article, we will see the 5 chords most commonly used in Grateful Dead songs and how to use them to start playing jamming along to one of the most inclusive bands to have existed. Keep in mind, it is not just the chords that really make the song, but also the melody and the timing of the chord changes. The grooves of the songs along with the lyrics and melody are what we recognize as the main ingredients to the song. So while learning the chords, it is important to be able to time their changes according to the melody.

First, let’s narrow down our focus to the most popular songs from The Dead. Their catalogue is wide and varied and dedicated fans will always point out their favorites from more obscure live releases or longer tracks. However, we will look at the more popular songs that even a casual listener will recognize.

The song list includes: Friend of the Devil, Casey Jones, Fire on the Mountain, and Ripple. Of course, there are more than 5 chords to some of these songs and we will include those as well. Furthermore, we will use the same 5 chords for each song, which means we might transpose (move to a different key) each song to fit the chords.

“Fire on the Mountain”

Let’s begin with an easy, 2-chord song, “Fire on the Mountain.” Originally, the song uses the chords B and A. However, we can transpose the song to fit easier chords by recognizing the relationship between B and A using the Nashville Numbering. If we consider the song to be in the key of B, then the B = I and the A = bVII. Transposed to the key of A would give us the chords A and G where A = I and G = bVII. Doing this means we cannot play along with the recording but we can play on our own and sing along.

“Friend of the Devil”

This classic jam song is a popular one for Bluegrass camps, camping trips and casual sing and play-a-longs.

It consists of just 4 chords: G C D Am and broken down into 3 sections of verse, chorus/refrain, and bridge – each characterized by 2 chords. The “verse” section is G and C or I and IV. It is followed by the chorus/refrain of D and Am or V and ii. It is important to look at these sections and how they relate to each other to see how the song structure helps move us through the song.

So, we can look at the verse as a general section establishing our I chord, and the chorus/refrain as a section that departs and holds tension that wants to go back to the verse. Finally, we have the bridge section consisting of D (V), C (IV), and Am (ii). This section avoids the use of G (I) and revolves mostly around setting up the D (V) by way of the C (IV) and Am (ii). It finally resolves back to G (I) when it returns to a verse and chorus section to tie it all back together.

A deceptively meandering song, “Ripple” uses simple chords but relies on the melody to hint at when to change them.

Again, the key to playing this song is hearing when the  melody leads you into the next chord. If we counted in 4 and tracked the chord changes, it would look something likes this: Gx2 Cx2 (where the “x2” means play for 2 measures of 4 beats each) for the first line, then Cx3 Gx1 for the second line (notice the lines each consist of 4 measures), and is rounded out with a third line of Gx1, Dx1, Cx1, Gx1.

The chorus section also consists of 4-measure phrases as follows: Amx2 Dx2 and then Gx1 Cx1 A7x1 Dx1. The idea of the melody leading the way and implying when to change chords is a main ingredient for Grateful Dead songs taken from how jazz music is usually conceptualized.

This song lands in the key of C, which is a very common and comfortable key for us ukulele players. The chords are mostly C, F, G, and D but we also play an Am and E7. Like most of their more popular songs, this song follows a simple phrasing structure of 4 measures per line.

Again, this allows the listener to focus more on the story of the lyrics rather than any weird timing or crazy chords. We begin with the chorus and 2 chords: Cx2 Fx2 followed by Fx3 Cx1 for a total of 8 measures which is then repeated again to round off the chorus section. The verse section is: Cx2 Dx2 then Fx2 Gx2 (8 measures) followed by Cx2 Dx2 then Fx1 E7x1 Amx1 Gx1 (another 8 measures). This is basically the whole song with an ending of A7 D7 G7 C for the last 4 measures of the song.

As you can see, there is nothing special or particularly unique about the chords used in Grateful Dead songs. The magic happens in how they use those chords to move us from section to section in a song and help move the story of the lyrics along. Grateful Dead songs on the ukulele are a great study in lyricism, melodic-driven music and how to use simple chords to tell a story. Practice the chords in the song, but more importantly, listen to the songs and practice hearing when the chords change. Jam on you crazy Dead heads!