I have a question for you. How many famous uke players can you name? After America’s Got Talent skyrocketed Grace VanderWaal to fame, chances are you can name at least one. The spunky and talented then 12-year old certainly made the ukulele a well-known instrument and showed that you can make a career out of this often undervalued instrument. You may be surprised to learn, however, that there are many other famous musicians who play the ukulele, and some non-musicians whose ukulele playing may inspire you as well. Let’s talk a little bit about them!

Ukulele Players Who Used Uke in Their Songs & Performances 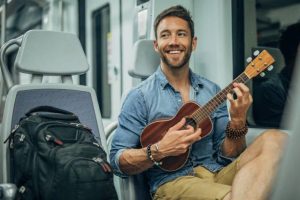 Perhaps the most well-known of uke players is Israel Kamakawiwoʻole, although its probably difficult for non-Native Hawaiians to pronounce his name. Known simply as IZ to many, his cover of “Somewhere Over the Rainbow/What A Wonderful World” is one of the most popular and recognizable ukulele songs in modern times. Released in 1994, it was all over the airwaves for years. Sadly, IZ died in 1997 at just 38 years old.

Next on our list is Joni Mitchell. Joni Mitchell is a singer from the 1970s whose hit “Big Yellow Taxi” was covered by Counting Crows in the early 2000s. A talented artist who played multiple instruments, she began her musical stylings on the ukulele and continued to incorporate it into her performances for years.

Elvis Presley is another artist who played the ukulele, and my older readers may remember him strumming away at one in the movie “Blue Hawaii.” His song “Can’t Help Falling in Love” is a popular ukulele cover to this day.

As I referenced at the start of this blog, Grace Vanderwaal is another famous ukulele player. She got her start on America’s Got Talent at just 12 years old by performing her original song “I Don’t Know My Name.” She went on to win the season and has continued to make music. Her songs have been featured in movies like Wonder Park and Star Girl. Star Girl, of course, featured her music because she also starred in the movie! Check out her amazing performance during her audition for America’s Got Talent, when Simon Cowell told her she was going to be the next Taylor Swift!

And speaking of Taylor Swift, she is another ukulele player on our list. Of course, this should come as no surprise given her incredible musicality and songwriting skills. While the ukulele is not her instrument of choice (she is more often seen playing the guitar or the banjo), she did play the ukulele on her Fearless tour back in 2009. Undoubtedly she has inspired many artists to play the ukulele or another instrument like she does.

Check out her talking about and playing the ukulele in this YouTube video below!

George Harrison (and the rest of the Beatles)

Next up on our list is George Harrison! You know, that guy in The Beatles? He was not just into rock n’ roll, he was also a ukulele player, and he *loved* the instrument! He felt that everyone should learn and play the uke because of its ease of use and it’s fun, light-hearted sound. After his death in 2001, Paul McCartney, his former bandmate, has played ukulele to honor his friend.

So who else plays the ukulele? Eddie Vedder from Pearl Jam! As a rock musician from the 1990s grunge era, he isn’t one that would immediately come to mind when thinking of famous ukulele players. However, back in 2011, he released a solo album entitled simply “Ukulele Songs.” Check out the song “Can’t Keep” from that album: Can’t Keep What do you think? Did you ever picture Eddie Vedder as a ukulele player?

Non-Musicians Who Play the Ukulele

So what about people who are famous or well-known for something other than music? Do we know if any of these people play the ukulele? Actually, we do! It would be impossible to list them all here, but to wrap it up, let’s look at just three.

While many older readers of this blog will likely remember that President Bill Clinton was a saxophone player, did you know that Barack Obama played the ukulele? It should perhaps come as no surprise since he was born in Hawaii but it is still neat to know that a former president enjoyed this adorable and fun instrument. 2020 Democratic presidential candidate Tulsi Gabbard, also a Hawaiian native, plays the ukulele as well!

Yes, Neil Armstrong the astronaut played the ukulele! There are now very famous photos of Neil entertaining himself while in quarantine after the moon landing, casually strumming the ukulele.

Ready to Start Playing the Ukulele Yourself?

So what do you think? Does anyone on this list surprise you? Are you feeling motivated to get into that next ukulele lesson and practice some ukulele yourself? What famous uke players do you know of? Throw them in the chat below!