You’re a theater enthusiast. Maybe an actor, director, or just someone that is an active theater goer. Perhaps you have found yourself wondering what it takes to write a play, and even entertained the idea of writing one yourself! But what if you don’t know where to even start, or wonder why to try it in the first place?  I’m here to get you inspired by offering you tips on how to put your ideas together to write your own play; in other words, create something wonderful.

The first major step is to brainstorm, but this is a step that has several components when it comes to creating a completely new play!

In no particular order, you should brainstorm the following: what styles of theater you like (contemporary, historical, abstract, children’s, comedy, musical, etc). You will also need to brainstorm on the main theme – what is your play about? What are its main plot points?

The other big bullet point, if you will, is who is needed as far as characters go to tell this story? As a playwright, you may also want to brainstorm the overall look you are envisioning for the play.  While many directors ultimately decide many things in this area, often the playwright will put specific things about the set and props in the script itself.

2. Write Down Everything You Think Of

Here’s the best tip I give creatives when it comes to brainstorming: write every little thing that pops into your head down. Really! The worst thing you can do is edit yourself prematurely. Editing comes later….much later. You never know what ideas you may use later. Something that may not be so apparent to you immediately may be just what you need later on. For example, an idea of a specific supporting character may be dismissed early in the process, and later on you may find yourself that the character totally works in your script.  So, write it all down, and don’t hold back… ever!

3. Set Aside Plenty of Time

The brainstorm may be the real tough part, but it’s absolutely essential when you’re writing your own play. Allow yourself all the time in the world with this step. A good play can sometimes come easily to you, or maybe it won’t.

Let the brainstorming just happen rather than force it, and try not to get frustrated with the creative process.

After you’ve brainstormed and feel like you have come up with the main framework of your play, it’s time to start telling the story. One big suggestion I have for someone writing a play is to make sure that your main characters have a few key character driven monologues in the show. If you are holding auditions for your play, you will want to use these for potential actors.

Another suggestion is that when writing your play, you want to make sure you include specific stage directions if they are key to the plot. While the stage director will make most of the decisions here, there are certain things that will remain consistent in every production, so be sure you include those in italics!

My last suggestion is perhaps something you may not have considered before.  Get trusted actors you know to read through the draft of your play out loud! This table reading of your original play will offer you a new perspective on where your play is at, and what may need to be tweaked. Actually hearing your words in other voices will give you a better idea of how workable your play’s script is, as well as give you an idea of the sort of actors that may work for it.

And Now…Why You Definitely Should Write a Play 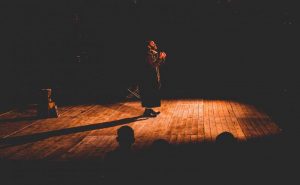 Writing the script for a new play is a great way to push your creativity. And having a play staged and your words brought to life onstage can be an incredibly rewarding experience. Here are some reasons to write a play.

The best reason I can give you to write your own play is because new material is always being sought and promoted.

There are theatrical festivals all over the world, and they are constantly seeking submissions. You never know whose work will catch the eye of the right people, possibly bringing your play to very big places!

Another reason to write your own play is to have material to self-produce. It is a satisfying task to see a project through from start to finish. And since it’s your work, you can choose to have your material performed however you see fit.

Maybe you are a drama educator, and the shows you are finding for your young actors just aren’t working for your current students. Well, as a playwright, you can write something just for the talent you’re already acquainted with. The same can also be said if you have a small theater company, a church, or any other drama group.

3. Experience the Joy of Creating

There are few things more rewarding than putting your ideas down on paper, and then seeing actors breathe life into those ideas. Whether you write a script just for fun, self-produce a production, or market your work to the theater community and seek out publishing opportunities; writing a play is a creative pursuit that will help you grow as both a writer and a person.

Stay True to Your Creative Self – Don’t Let the Process Intimidate You! 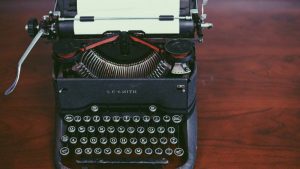 Don’t let wanting to write your own play intimidate you. If you have talent that inspires you or a story you have always been wanting to tell, it’s time to start brainstorming to see what possibilities appear! Good luck, and enjoy the process!