Mr. Crowley. Smooth. Sweet Child o Mine. Let it Be. All these songs have something in common. A captivating guitar solo. What makes a great solo? More importantly, how do you write a guitar solo? In this article, we’re going to dive in and discover what makes great solos and some tips on writing a guitar solo.

My influences include lots of 80s rockers (Randy Rhoads, EVH, Slash) and Latin players like Sergio Vallin, Carlos Santana, and Al DiMeola. I tend to use very little effects because I believe the best guitar sounds are that of the guitar as bare as possible. Once too many effects get stacked, I no longer know what is playing, the guitarist or the effects. 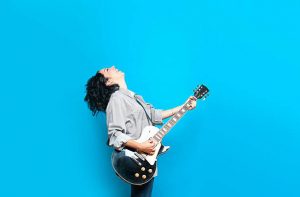 So you’re probably asking, “why does THIS guy get to write about this?” or maybe, “who does THIS guy think he is writing this article?”. Those are fair and legitimate questions. I like to believe that I have written and continue to write captivating guitar solos. Don’t believe me? Judge for yourself here.

A Guitar Solo Tells a Story

So a great solo tells a story. What do I mean by that? I mean that there is a clear structure to a great solo. Can these rules be broken? Sure. It’s just not that common. There are clear phrases that a solo asks, then responds. A good example of this is the solo from “Tornado of Souls” by Megadeth. The solo is written by Marty Friedman but performed here by Kiko Loureiro.

Listen to how the solo can take you through different emotions and paces, and explore that concept as you experiment with writing your own guitar solos.

A Guitar Solo is a Song in and of itself

A guitar solo should be a song by itself. Basically your listener(s) can start your song starting at the beginning of the solo and stop listening at the end of your solo. This should have enough substance to it to be considered a great solo. One of my favorite solos that I’ve written I think gives a good example to this. Solo starts at 2:25

A solo not only has cool melodies, but listen to the background music as well. A good guitar soloist will allow their solo to grow out of the song, and so becoming a good listener and learning to play with others is key. Consider adding another guitar to layer some parts of your solo and harmonize it to give it a thicker sound.

In “November Rain”, there is literally a whole song at the end (7 min mark). This can be a song on its own. Check it out.

General rule: The melodies you can SING, are the ones that you remember best. If your listeners can even hum what you are playing, your solo will connect with them because now THEY can perform it with their own voice. Now sometimes it is a lot of fun to just shred away. I think it is important to do that during certain parts of the song. Take “Sweet Child o Mine” by Guns ‘n’ Roses. Slash does a phenomenal job of starting the solo off very epic and singable. As the solo continues, the intensity builds as do the quickness of the notes. This is an example of a climax at the end of a story.

In this song of mine, “Verdad o Consecuencias”, I wanted an extremely singable melody because instead of a singer, I got a rapper for this song. I wanted to compensate by writing a very singable solo. Check it out (Solo starts at 2:35):

Also, if you haven’t heard “Sweet Child o Mine” give it a listen, and pay close attention to the guitar solo. I’m sure most of you have already.

Most Importantly, Listen to your favorite artists

This is what you should get from this article. There is NO magic scientific formula to a solo. There is no one secret or skill that will unlock your potential as a guitar soloist. The BEST advice I can give you is to listen to your favorite artists – listen in the car when you’re driving, listen during your guitar practice time, listen while you make dinner.

Learn guitar to the point of not needing to think of it anymore and apply what you’ve got. Make it sing. Make the guitar solo section a song of itself. Your audience should love your solo so much, they listen to your song just for that.