Music existed for thousands of years, long before notation came into being. The creation of music speaks to an innate human need, for it has existed for almost as long as humans have been in existence: there are prehistoric cave paintings illustrating instruments, as well as discoveries of actual prehistoric instruments such as a bone flute from the Stone Age.

Music was also an important aspect of ancient civilizations, like the Egyptian and classical Greek civilizations, and was used for the theater arts, religious ceremonies, and also for private entertainment.

Prior to notation, music was an oral tradition passed down from generation to generation. We do not have any way to reconstruct what it may have sounded like, other than from descriptions from written sources. These sources include the biblical Psalms, such as Psalm 47 (“O clap your hands, all ye people; shout unto God with the voice of triumph….The Lord with the sound of the trumpet”).

The Greeks developed a notation which specified pitches. Pythagoras is a famous example of the discovery of harmonic ratios in music, which is the basis for the concept of harmonic consonance and dissonance.

One of the earliest notated music examples were the chants for the Roman Catholic Church. Similar to the Greek notation, it showed pitch relationships, and allowed one to see the melodic contour, while giving little information about the rhythm.

Early notated examples originate from the 9th century, which use cheironomic or in campo aperto neumes, as they were called, to show the contour of a melody written above the text against a staff-less background.

Rhythm was based on how these neumes were interpreted, and there was no systematic or standardized method to notating rhythm. These chants show the influence still of the oral tradition, as one must already know how the chant sounds in order to be able to learn it. cheironomic or in campo aperto neumes

The notation of neumes gradually became more specific, with exact and relative pitch notation rather than a general shape. These were called “heightened” or “diastematic” neumes, which led to the creation of a one to four-line staff (a precursor to our modern 5-line staff), an invention usually credited to Guido d’Arezzo. He invented the Guidonian hand, which assigns note names to different parts of the hand. 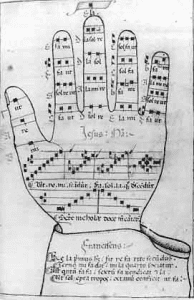 By the 13th century, the notation of chants was more specific, with a clef, a staff of four lines, and discernible pitches, written in what is called square notation. 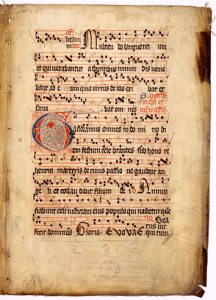 Similarly, modern notation also designates specific lines on the staff to be associated with specific pitches. The 5 lines provide a context for the location of the pitches: the space between the lines or the point on the lines is associated with a specific pitch. Regardless of what instrument one plays, musical notation is standard and consistent across all instruments: a 5-line staff, rhythmic notation, meter, and pitch designations.

Rhythm, Meter, and Bar Lines Are Also a Part of Modern Notation

Bar lines are vertical lines which organize the music visually so that it is easier to read. Bar lines became a part of music notation in the early Baroque era, and Castello’s violin sonatas were one of the first music scores to utilize bar lines.

Our modern notation of dynamics, bowings, phrase markings, slurs, articulation marks, precise rhythmic notation and other details coincided with the specialization and divergence of the composer from the performer. Despite this specificity, written music is still merely a symbolic guide and roadmap to make concrete what is intangible.

The role of the performer is to interpret the composer’s intentions based on these symbols, which brings us to the vital question that all performers must face: the role of performance, interpretation, and analysis, a subject widely discussed since classical times from Quintilian to Quantz, and which is still a very vital question faced by performers today.