Every country where Spanish is spoken, dialects have their own characteristics and particularities. Some of us speak it faster than others. Some curse more than others, and some are easier for Spanish learners to understand (i.e. Colombian Spanish). Native Spanish speakers around the world would agree that the Spanish from Puerto Rico is one of the most difficult dialects to understand. And I don’t mean just for Spanish learners, but for natives too!

If you are learning Spanish and have the very specific goal of learning Puerto Rican Spanish, you have come to the right place! In this post, we will talk about what makes Puerto Rican Spanish different from other Spanish dialects and what you can do to learn it. We will go over what makes the accent so different and what words you can add to your vocabulary to sound like an authentic puertoriqueño!

Before we go into specific words used by Puerto Ricans, we need to start by going over the accent which is what truly sets this dialect apart from others.The dialect is a combination of the Taíno (Indigenous caribbeans) and Spanish sounds with African pronunciations. And you will be surprised to know that some aspects of the Spanish from Puerto Rico might be easier for you to pronounce than in standard Spanish. For example: Do you find it difficult to roll your Rs? Keep reading!

The “R” sound: You will find that in P.R. the R is often pronounced as an L. Be careful though. This pronunciation will depend on the position of this consonant in the word. An R at the beginning of a word will always be pronounced as R (not doing so, could change the meaning of a word or make it incomprehensible). The same goes for the double RR sound which is also pronounced as a strong R sound and not L.

So when does the R change to L? When the R sound is in the middle of a word and before a consonant sound.

The “D” sound: This consonant sound is commonly eluded in word endings, as in, final syllables that start with the letter D.

For example, many adjectives in Spanish end in -ado, -ido such as enamorado (in love), dormido (asleep), encantado (enchanted), acelerado (accelerated). In this case, most Puerto Ricans will elude the D sound completely and instead say: enamorao’, doLmio’ (remember to turn that middle R into an L), encantao’, acelerao’ respectively.

The “S” sound: Puerto Ricans will either completely ignore the S sound or turn it into H sound (something that can be found in other caribbean accents such as Venezuelan Spanish). This change also applies for the Z sound. This phenomenon will occur when the S is in the middle of a word or at the end. So you will hear words like:

(the lather completely drops the S at the end of “niños”)

The S sound at the beginning of a word, however, is NEVER dropped so a word like “serio” (serious) the pronunciation is ‘Serio’.

Word endings: Lastly, in Puerto Rican Spanish, the last syllables tend to be chopped off. The preposition word para is often said as just pa, as in: Vamos pa’ allá instead of Vamos para allá (Let’s go there). Another word often cut is nada (nothing) in a sentence like: No tengo nada (I have nothing) you will hear No tengo na’. This is commonly done with high frequency words as it is easier to understand what the chopped word means, so don’t do it with just any word! 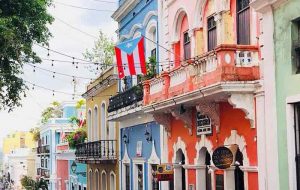 Now, let’s take a look at some words you can incorporate to your repertoire if you want to start sounding like a true puertoriqueño.

One interesting aspect about Spanish from Puerto Rico is that quite a few words that are more or less the same across other Spanish speaking countries are significantly  different in Puerto Rico. Take for example the word ‘banana’. In most countries this word is essentially the same, but in Puerto Rico ‘banana’ is guineo. (Tricky, right?)

Here are some other words and popular phrases that you will often hear on the island:

Pana: Puerto Rico shares this word with Venezuela. Pana means a very close friend. It is used quite often and even though it ends in “a”, pana is used for both men and women. Example: Ellos son mis panas (They’re my friends)

Wepa: This is an expression you can use to express excitement. It’s similar to saying  yasss in English. For example: A:“Me voy a casar” (I’m getting married!) B: Weeepa!

Brutal: This is an interesting use of this word. In other countries, brutal usually means cruel or inhumane. However, in Puerto Rico it can be used as a compliment to describe  something that is beyond incredible.

Pichear: To forget or ignore someone or something completely. For example: Ese hombre me está tratando de hablar y lo estoy pichando (That man has been trying to talk to me but I’m ignoring him).

¡Ay Bendito!: An expression to indicate pity, shock, anger and sometimes even sarcasm. Example: A: Se estrelló un avión. B: ¡Ay Bendito! (A: A plane crashed! B: Oh my god!).