Mention the subject of improvisation around a pianist, and you’ll get a mixture of intrigue, excitement, and exasperation. Some pianists love the idea. Others are terrified of the idea of playing notes that are not on the page. If you’re intrigued, you may be wondering how to improvise on the piano.

The amazing thing is that improvisation is no different than learning to speak a language.

However, pianists sometimes get frustrated because they think that this specific language is so different from classical study and other more “traditional” methods of learning. But I like to tell people all the time, “It’s the same 12 notes.”

Improvisation, at its heart, is a conversation. 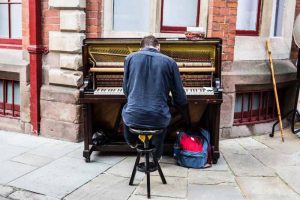 The iconic vocalist and improviser Bobby McFerrin teaches improvisation in a novel way.

He uses the example of children making up songs in the shower. In this way, he proves that improvisation is already part of the natural language of children.

So, you don’t really have to go too far to start realizing that improvisation isn’t as hard as it sounds.

A great way to become familiar with basic improvisation is just playing on the black keys, which is also known as the pentatonic scale.

Because of the nature of these notes, there are no “wrong” notes or melodies. You can simply explore the sound and give yourself permission to try different rhythms and harmonies.

When in a lesson exploring improvisation, it’s very helpful to try a call and response exercise.

In other words, you mimic a melody line or rhythm played by a teacher as closely as you can.  But the second time you play it, you change it just a little bit on purpose.

In this way, the improvisation becomes a natural response.

Is improvisation only for jazz players?

For classical students, the hang-up often becomes their misunderstanding of improvisation as simply something that jazz musicians do.

It’s true – jazz is a genre that relies heavily on improvisation. But that doesn’t mean that only jazz or contemporary pianists can improvise.

Any pianist, in any genre, can learn to start improvising by taking the music they play and giving themselves permission to alter, change or personalize it.

There are a few basic principles to improvisation that we can apply to most situations in any genre or style.

One, improvisation is all about adding or altering the original music or melody, but not to the point that the song becomes unrecognizable. So you will need to be familiar with the original structure of the song.

Two, there are certain chords and harmonic techniques that work well when applied to a song. Some of these methods are called chord substitutions. When you apply them to a song in the right context, it adds a level of individuality that makes the performance unique.

But you might say, wait! Obviously there are rules to music, and there has to be a structure, right?

But in the same way that language and speaking can be modified to be more personal to the situation, the structure of certain songs, harmonies or melodies can be improvised to add meaning, feeling or personality.

Other examples of improvisation 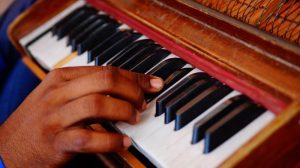 So while it’s impossible to detail every aspect of improvisation when playing the piano, let’s use the example of a jazz trio, where a pianist is joined by a bass player and drummer.

When you come to play with an ensemble, you start with the idea of creating a musical conversation.But then obviously, you have to have some rules. So, a knowledge of basic theory, and an understanding of chords is necessary.

The structure of the melody is only three notes. And so, you may start with something very simple, playing exactly what the melody says.

But then, you can start to change things around. So you could add a fourth note, another C note, to see if it fits. Maybe you like the sound of it! Maybe you don’t.

Learning how to improvise on the piano is all about taking risks.

That’s the thing. Sometimes we get risk averse when thinking about improvisation. But you need to keep taking risks and say, “It’s okay to make a wrong note every once in a while, because the wrong note actually becomes the right note in improvisation.”

So, whether you are playing from a lead sheet (one in which harmonies are written generally, so that you can improvise the chord structure), or a jazz piece with an improvised solo, or even a classical piece where a cadenza allows for some improvisation (all of the classic cadenzas were usually improvised by classical pianists), the first step to improvising on the piano is giving up the idea of only playing ‘the right notes.”

Explore, learn to take chances, and make the music your own! If you’re wondering how to improvise on piano, remember that the best way to learn is to try it out yourself. You’ll be surprised how easily you’ll begin creating musical conversations that never existed before.