French is a language that has reached over 25 countries and touched many cultures over the centuries. It was the lingua franca before English overtook it, and still remains a formidable language in the international community. Perhaps one of the places on which it maintains a significant stronghold is in Quebec, Canada, and certainly Quebecois is the most well known French-speaking former colony.

French settlers established communities there in the 16th and 17th centuries, and the language itself remains inseparable with the Quebecois identity. While Canada is a bilingual country officially, Anglophones outnumber Francophones. Never people to admit defeat, Quebecois, as it is called, continues to be spoken as a first language by around 80% of the people from Quebec, thanks to concerted preservation efforts, but it has evolved at a different pace from French spoken in France. Quebecois and French remain mutually intelligible, with some interesting differences that are outlined below. 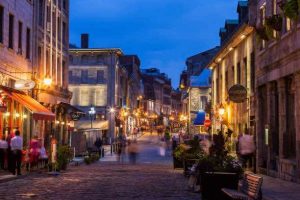 This is a curious one, because Quebecois has retained some expressions that would sound quaint or outdated in European French. This is perhaps due to the condensed and smaller community of French speakers that comprised the Quebec region, and certainly due to different influences and contact due to geographic location. France has adopted certain terms, such as “email”, whereas Quebecois continues to use the traditional word “courriel”. Cars could be called “le char” (from chariot, an older French word), while they are called “la voiture” in French. However, this is not to say that Quebecois in general is more traditional. Vocabulary differences also include some aboriginal words from the language exposure to the indigenous languages that are not used in France.

Due to the bilingualism in Canada, the Quebecois grammar and sentence phrasing sometimes reflects the English grammar structure instead of a traditional French way of expressing a sentence. It’s a curious mixture of old-fashioned words and anglicized sentences. For example, the French might refer to kissing as “embrasser”, and it could be called “frencher” in Quebecois, which is much closer to the English expression “French kiss”. Beans are also called “binne” in Quebec instead of “haricot”. Similarly, some English idioms can be translated directly and used in Quebecois, something that would not occur in France.

4. Despite the Anglicisms, Quebec refuses to cede to English

Unlike France, where you would see a red “Stop” sign, you would see an “arret” sign in Quebec, which is the French word for “stop”. Government institutions also are operated in French, even though they do make information available in English for Canadian Anglophones. Different destinations in Quebec adopt these approaches in unique ways. Montreal is more of a bilingual city perhaps than Quebec City, where it would be more of a challenge to get around speaking only English. The Quebecois are fiercely protective of their language in the face of so much competition from English, and many schools emphasize the importance of speaking Quebecois, and not English, as a first language.

5. Grammar and formal and informal usage

There are differences in punctuation between Quebecois and French. In France, there are unbreakable spaces between the ending word of a sentence and a question mark or exclamation point. These are not always found in Quebecois because of the close proximity to English. Likewise, the direct translation between English and Quebecois will sound strange and awkward to French speakers from France. In France, there is still a huge emphasis placed on the formal “vous” vs. informal “tu” usage. This difference is not as important culturally in Quebec, and “tu” is used much more often. You might get away speaking informally to even teachers and professors in Quebec, whereas, in France, they would not look too kindly on one taking such liberties.

We won’t go into detail here because profanity is a controversial subject, but suffice it to say that insults and curse words vary greatly between Quebecois and French. Quebecois retains a much stronger Catholic influence in these words, something that definitely is not used in France. There are swear words in Quebec that might be very vulgar to the Quebecois, that sound amusing and quaint to French speakers who most definitely have taken profanity to a whole new level.

As a continual language learner, I am always interested in these types of variations, and hopefully these points pique your interest, as well. Differences in the same language spoken across countries say a lot about the different cultures that have adopted them. While Quebecois and French share the same origins, the unique evolution both have gone through independently are worth studying.

The only way to fully appreciate and understand these are by visiting both places and experiencing them firsthand. Of course, the good news is, regardless of the French you’re more familiar with, you’ll be able to navigate both places and speak to a wide variety of people. Connecting with one of our experienced French language tutors can help prepare you for this!