As vaccinations start to roll out, we’re finally seeing the light at the end of the tunnel. But, it’s still going to be a long time before live theater returns fully. Holding a virtual performance may feel like a sad substitution – no applause or audience response, no interaction with fellow cast members, no fun backstage rituals –  but it’s what we’ve got for now. At least it gives us a way to continue honing our craft and expressing ourselves, and there are lots of possibilities.

Some of the Ways You Can Use Virtual Performance:

This is a useful skill even when theaters resume completely in person, since many companies allow actors to submit video auditions when they’re unavailable or out-of-town during the normal audition phase.

Many artists are filming themselves singing a song or doing a monologue to share with friends & family, or to help inspire others. Again, this could be something you’ll want to do even when we’re able to perform in person, and for now it’s a great way to keep your skills up.

Some schools and theater programs are doing read-throughs, or even semi-staged productions, where everyone is in a zoom meeting in their own windows.

This is the most typical option, where the individual actors film themselves and an editor puts everything together, often including digitized backgrounds, sound effects, and background music.

Regardless of what type of virtual performance you’re doing, I’ve got some tips to help you make it as effective (and satisfying!) as possible:

The camera is your invisible scene partner – and it knows what you’re thinking! I know it feels weird to talk to a computer screen or camera, but if you imagine it’s the other actor, or the imaginary person you’re talking to, it really helps animate your face.

You can fake a lot on a big stage where the audience can barely see your facial expressions, but the camera almost reads your mind (which is why a lot of stage actors have a hard time transitioning to film work). Make sure you have real thoughts in your head, which will help you come across far more genuinely than if you think, oh, here I’m angry, or this should look happy.

1. Find the best camera angle for you 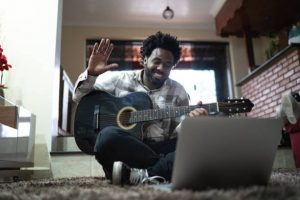 Unless your face is perfectly symmetrical, which is very rare, you probably have a side that photographs better, or reads as more expressive.  Play around with angles – you can face the camera but cheat slightly to one side.  And in general, filming ourselves from slightly above eye level is more flattering (since nostrils are no one’s best feature!, and as we age, lines and shadows are more prominent when viewed from below).

2. Pay Attention to Your Setup, Just Like You Would Onstage

You wouldn’t produce a live play without considering lighting, scenery, costumes, etc.  The same holds true for a virtual performance.  Find a neutral space in your house, or a background that reflects the scene you’re doing – but simple enough so that the focus is on you.  One great cheat for lighting is an inexpensive ring-light that can plug into the computer (and is more flattering slightly above you).  And if you want to get fun ideas for home set-ups, there are some great youTube ‘behind-the-scenes’ features about how local newscasters have adapted to filming from home. 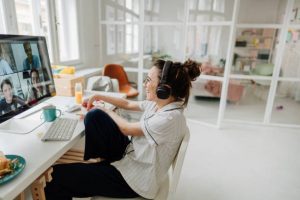 And the Best Tip of All?

Remember things will occasionally go wrong, so stay flexible, and in the moment, and willing to jump in with an adlib or any of the other things you’d do onstage, only this time you’re covering for someone who forgot to mute themselves so you hear their barking dog, instead of an actor who missed his entrance because the prop door got stuck shut. But it’s all part of why we love live theater – so have fun!