Have you ever seen a 12 string acoustic guitar in a music shop and felt intimidated? Well, great news! If you can play a 6-string guitar, you can play a 12-string. I don’t mean eventually, I mean right now. Let’s take a closer look at what all those extra strings are, why they’re there, and what they can (and can’t) do.

First of All, How is a 12-String Acoustic Guitar Tuned?

The answer is, exactly like a 6-string but with each string doubled. So, going from bottom to top (pitch wise), we have 2 E strings, then 2 As, 2 Ds, 2 Gs, 2 Bs, and finally, 2 more Es. On those highest two pairs, the two strings are exactly the same pitch, while for the other four, one string is the same as its 6-string counterpart, and the other is exactly one octave higher.

Imagine you played a C major chord on a standard 6-string guitar, and at the same time you had a friend with a guitar capo’d at 12th fret (the octave) play the same chord. The sound made by the 2 guitars together would be similar to the sound of a 12-string guitar playing a C major chord by alone.

Simple enough. Notice that they are spatially grouped into twos, so that each of the pairs of matching strings are a little closer together than the other strings. This is so they can be held down together with a single finger. Once you realize this, you’ll notice that every chord shape you already know should easily transfer to the 12-string with very little extra work. See, I told you you already knew how to play a 12-string.

But Why? What Do All Those Extra Strings Do? 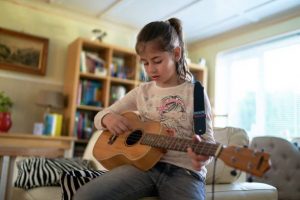 They make your chords sound fuller. They add more voices to the sound without altering the underlying harmony. This is intuitive with the octave pairs, but even the identical pairs at the top end have this effect, since no 2 strings are ever exactly in tune. Small variations in the tuning of the two strings gives the instrument something of a “chorus” effect, where the imperceptible differences in the strings’ tuning makes isn’t far enough to clash, but gives the tone a richer, “fatter” sound.

So Why Would You Ever NOT Want To Use a 12 String?

The most obvious answer would be when leading (usually, as with all things there are exceptions). 12-strings make great rhythm guitars, where the depth of sound creates thickness and sonic texture. But this may not be the ideal sound for crisp, precise lead playing. 12-string acoustic guitars are also not well suited to sounds that rely on a dominant low end.

Because all of the added tones are an octave higher, playing a 12 string will cause you to lose a lot of that all important bass. If you’re going for chugging power chords, you might want to stick to a six-string.

Finally, the added strings can slow the fingers down a bit, especially while getting used to the instrument. Over time, most players can adapt and learn to play the music they love on a 12 string, but it can sound clumsy for very new players playing very fast chord changes. So, this is something to be aware of. It can be especially difficult for travis-picking or other finger-picked patterns, give the fact that each finger now has to pluck two strings. 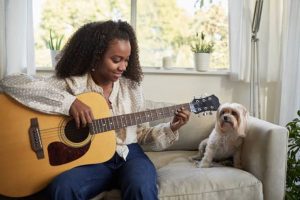 In short, if you’ve never played a 12-string acoustic guitar before, what are you waiting for? Get down to your local guitar shop and try one out! It plays just like the instrument you already know, and when used correctly, the instrument can create a rich, layered, and iconic sound that’s impossible to achieve any other way. But maybe don’t toss out that 6-string just yet. Every tool has a purpose, and not every instrument is right for every song. Knowing how and when to use a 12-string can make you a stronger, more versatile, and more interesting rhythm player, with very little added effort. So why not try it?