Stuck in a musical rut? There’s no need to wallow in your boredom! There are so many genres of music out there to explore, and you might find that one of them is exactly what you’ve been missing.

The violin is one of the most versatile instruments around. It can be played in a symphony orchestra, a rock band, or even as a solo instrument. Violinists can play classical music, jazz, folk music, and pop music. There are all kinds of violin music genres out there!

In fact, there are so many different genres of music that can be performed on the violin that it can be hard to know where to start. If you’re looking for some inspiration, here are five different violin music genres that you should try.

To get you started, here are a few genres of violin music that are sure to get your toes tapping!

What Are the Different Styles of Playing the Violin?

There are many different styles of playing the violin, ranging from classical to folk to pop. Each of the violin music genres has its own unique characteristics, and players will often specialize in one or more styles:

No matter what style of music you prefer, there’s a good chance you can find a violinist who specializes in it. And the list above is not exhaustive by any means – we’ll tackle more violin genres of music later on in this post.

For now, get yourself signed up for violin lessons so you know all the essentials you need to master before you start branching out. Check out some of the benefits of violin lessons by watching the video below:

What Genres of Music Can the Violin Play?

When you think of the violin, what comes to mind?  Maybe a classical violinist, playing a beautiful solo piece with a world renowned orchestra, with soaring highs and rich lows. A powerful fortissimo and a whispering pianissimo. Although this is one very popular style of music on the violin, there are also many other styles out there. 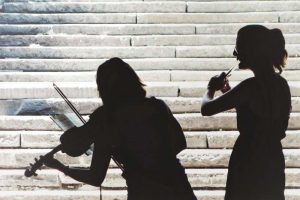 The violin is known to be one of the most versatile instruments in the world, and can accommodate a wide variety of genres.  From classical to bluegrass, pop to hip hop, here is an introduction to what the violin has to offer.  No matter your musical preference, with the violin, there is surely something to peak your interest.

Here is a list of violins musical genres so you know what sorts of categories you have to choose from!

Classical music is the traditional genre of music that most people think of when they think of the violin. It generally features complex compositions written by renowned composers such as Bach, Beethoven, and Mozart. Classical violins are usually played with a bow instead of plucked with the fingers like other genres of violin music. If you’re just starting out, classical music is a great place to begin because it will help you develop your technique and tone.

Ready to explore violin in different genres of music?

Folk music is a genre that includes traditional songs and dances from various cultures around the world. It’s often passed down from generation to generation and often has historical or cultural significance. While many folk songs are intended to be sung, they can also be played on the violin. Folk songs often have simple melodies that are easy to learn, making them ideal for beginners. Plus, they’re usually quite short, so you won’t get bored playing them!

Pop music is one of the most popular genres of music today. It includes everything from chart-topping hits to vintage classics from decades past. While pop songs are usually associated with singing, they can also be played on the violin. Pop songs often have catchy melodies that are easy to remember, making them fun to play even if you’re not a virtuoso violinist!

Cinematic music is a relatively new genre that combines traditional orchestral pieces with modern production techniques such as electronic instruments and effects. This type of music is often used in movies and video games to create an immersive experience for the viewer or player. If you’re looking for a challenging and exciting genre to explore, then cinematic music might be right for you!

One of the pioneers of dubstep violin is Lindsey Stirling, a classically trained violinist from Arizona who later began to compose dubstep music for the violin.  In 2012, the music video for her original composition, Crystallize, went viral on YouTube.

Since then, she has released several albums of original dubstep music and has toured the world giving high energy dubstep violin concerts.  Back when I was twelve years old, Lindsey Stirling was a huge inspiration to me and one of the reasons I continued learning and playing the violin. You can check out her song Crystallize here:

Many violinists later venture into pop music after learning classical.  But playing pop violin is also a great way for a new musician to start off, especially if pop is their preferred music for listening.

The most important part about learning music is to enjoy yourself, so if you’re someone that loves pop music, you could be destined to be a pop violinist! Simply Three is a classically trained string ensemble that plays pop music.  Their violinist’s name is Glen McDaniel.  Here is a video from their YouTube channel:

This next style of violin is one that really hits home for me, and that’s because this is the main style of music I currently play! Bluegrass violin, more commonly called bluegrass fiddle among players of the style, is less popular than some of the other styles I’ve mentioned. However, it’s a great route for new musicians to go if they are interested in acoustic string band or traditional music.

Many bluegrass fiddle players do not have a background in classical or other styles of music, and in one sense they can be less versatile because of that. But they are usually very good at the style(s) that they can play.  The video link included below is from a very famous bluegrass band, The Del McCoury Band.  The fiddle player’s name is Jason Carter, and the song is “Uncle Pen”, a quite common bluegrass song written by Bill Monroe: 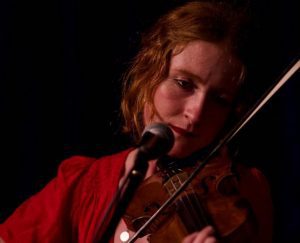 Jazz is a very broad style of music that encompasses many different sub-genres, some of which include violin in their ensembles. One particular example of jazz violin would be in Django Reinhart’s music. Django was a very famous Gypsy Jazz guitarist, and the violinist in his band was Stephane Grappelli. Stephane was originally a classical violinist.

Many good jazz violinists also have a background in another style of music. That’s possibly because jazz is a very complex and challenging style of music to understand and play. And it usually requires prior knowledge of the instrument and music theory. Here is a classic recording of Django Reinhart with Stephane Grappelli on “Minor Swing”:

There are many violinists that grew up listening to hip hop music, so naturally their violin style gravitated toward the genre. Hip hop violin songs usually consist of a violin melody with an electronic beat as accompaniment.  The style really works well on violin because the violin does a great job of imitating the human voice. In other hip hop or rap music, there may be a voice singing or rapping instead of a violin.

For those people that are skeptical about learning violin because they feel their musical style may not align with their musical taste, you might want to try playing (or composing) hip hop violin songs! I saw this hip hop violin and viola duo last year at a concert, and recently rediscovered them on YouTube.  They are called “Black Violin”, and this song is called “A Flat”:

The World is Your Oyster… Whether You Play Classical, Dubstep, or Hip Hop Violin.

Ready to branch out beyond top 40 hits? There are so many different genres of music out there waiting to be explored!

You may have noticed that many of the musicians I mentioned have backgrounds in classical music, although they currently play another style.  This is very common to see among violinists. Many new musicians or parents of new musicians see classical music as the best, or only, option for the violin.

Many violinists later realize that they can choose from a practically unlimited list of genres for the violin, and decide to change their focus. In reality, classical training usually provides violinists the necessary skills to later learn any genre of music, so it is a logical place to start. But once you get the feel for the instrument, the world is your oyster, and there are unlimited options for what you can do on the violin.

Whether you’re looking for something relaxing or invigorating, smooth or complex, there’s sure to be a genre that’s perfect for you. So go ahead and start digging – who knows what musical treasures you’ll uncover?

Of course, the best way to get started playing any kind of violin is to take lessons from an expert. Happy learning!