You are in your bedroom, studying for your math exam while listening to Spotify when all of a sudden, “Toxic” by Britney Spears comes on. That sultry, sizzling violin solo seizes all your attention, and you start nodding your head to the beat. All former plans of productivity are thrown out the window. You feel a sudden, agonizing urge to learn the violin solo, but you don’t know how.

So you google “how to play pop songs with a violin”.

And you find this guide 🙂 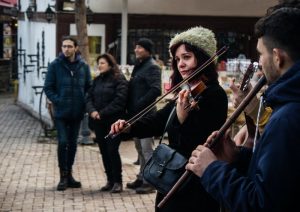 Playing “pop songs” on the violin requires somewhat of a different mentality than playing traditional repertoire.

The first difference is the way you practice the music. Often, violin players who play pop songs play by ear, rather than following notes on a sheet of music. In fact, many violinists who start out by playing only pop songs may not even know how to read sheet music.

The simplest way to play a pop song on the violin is to just play the melody (solo) line.

One can do this by ear, or by finding simple sheet music online.

If you are learning by ear, here are a few tips that would help you:

The fun thing about playing a pop song on the violin is that one can improvise and add their own personal flair to the song. If you want to know how to do this well, it requires slightly more advanced techniques and knowledge, but should not be too difficult to learn. Are you up to the challenge?

It is actually quite simple!

If you are feeling experimental and want to be confident enough to add your own unique voice to a pop song you are playing, you will want to learn the song’s chord progression.

So what exactly are chords? Chords, in their simplest form, consist of three notes – thirds stacked on top of each other.

Here is an example of a C major chord: 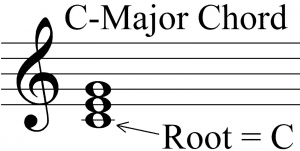 Here is an F major chord: the notes show are F, A, and C.

Say you are playing a song in the key of C minor.

The roman numeral “i” would be C minor chord, “V” would be G major, and “iv” would be F minor.

Most pop songs alternate between four basic chords. There might be a few outlier chords here and there, but you often only need to learn a few chords to be able to play the song.

If the song is in C major, the four chords would be C major, G major, a minor, and F major.

You can also figure out the chords of a certain song by googling it. For example, if you wanted to learn the chord progression to Queen’s Bohemian Rhapsody, just google “Bohemian Rhapsody chords”.

Now that you have figured out the chords, you can start experimenting! Try putting the song on and playing along with it. The simplest way to make use of your newfound knowledge is by outlining the chord by arpeggiating it. When you arpeggiate a chord, you play all three (or more) notes one at a time, in a row.

You can start improvising by playing any order of notes in the key you are in. For example, if you are in F major, you can play the notes (F, G, A Bb, C, D E, F) in whatever order or pattern you fancy. As the song progresses, the music will land on different chords/harmonies. As the music lands on these chords, try emphasizing certain notes of those chords. For example, it often sounds good to emphasize the 7th when you land on a “V” chord. Also, to jazz it up, you can start adding sevenths, ninths, or even elevenths of chords!

Play What You Love… And Experiment! 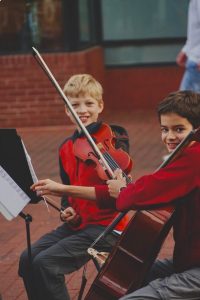 Of course, you don’t have to follow any set of rules, or stick to any set of notes without letting yourself deviate. Playing only the notes in a key is just the starting point, a rough guide. Often, the music sounds the most interesting when you start breaking the rules, as long as you can do so convincingly. The only rule is whether it sounds good to your ear!

Finally, the most important thing is to just listen, listen, listen. Play the song over and over again, listening critically. Feel the harmonies until you know them by heart. Be able to outline the chords in your sleep. This is the fastest track way to really master a song and make it your own. If you follow all these steps, you will be on your way to becoming a violin pop song expert! You will be able to easily play pop songs with a violin, and you’ll certainly be able to play “Toxic” by Britney Spears.