So, you’ve just bought an electric guitar, and you’re not sure what you’re looking at. What are the pieces of your instrument? And what function do each of them play in creating sound? Let’s walk through the electric guitar anatomy, and take a look at its various elements, one by one: 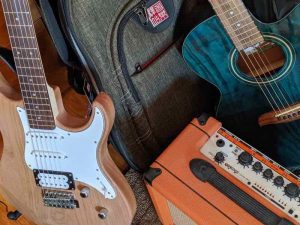 The body is the large solid mass of the guitar. This is usually made of wood, which may be finished or unfinished. Most electric guitars are solid body. This means exactly what you think it means. A solid body guitar generates all of its sound from the electromagnetic pickups (see below). Whereas a hollow or semi-hollow body guitar will have a resonating sound-hole like an acoustic guitar. This helps create a warmer, hybrid tone.

The strings of your guitar (usually, but not always, 6 of them), are what you will strum or pluck to make sound. Their vibration creates soundwaves in the air, which are read as electromagnetic pulses by the pickups, and translated into the pitches you hear as electrical signals.

The fretboard is the long skinny part of the guitar where your non-dominant hand (left if you’re a righty, right if you’re a lefty) can depress the strings at various points. By doing so, you shorten the vibrating length of the string. This raises its pitch. Because frequency ratios are logarithmic, the spacing of frets gets closer together as you get higher on the neck. Most guitars use inlays at specific frets (usually 5, 7, 9, and sometimes 3). These are used as visual guides, so you don’t get lost. The 12th fret is generally a double inlay and universally denotes the octave.

The bridge is the metal cage that secures the strings on the guitar body. It may or may not be “through body” meaning that it passes through the wood frame of the guitar itself.

Tuning pegs are the knobs (one for each string) at the top of the neck (known as the headstock). By turning them, you raise (by tightening) or lower (by loosening) the pitch of the string. Tuning pegs can be wound in either direction when re-stringing. But there is a conventional way to string them which is as follows. Pegs that point toward the ceiling when holding the guitar, which may or may not be all of them, are wound so that they get higher when turned away from the body, while pegs that point toward the floor, if any, are wound in the reverse direction.

Pickups are the plastic or metals bars built under the string, which sense the vibrations of the strings above. Then, they transmit those vibrations as electrical signals to the amplifier, which results in the actual sound you hear. Different guitars have different numbers of pickups. Two or three pickups is the most common. Pickups can also be passive, meaning that don’t need an extra power source to operate. Or active, meaning that they use their own electrical energy, usually in the form of a battery which must be changed periodically.

The pickguard is the piece of plastic on the downstroke side of your strings, where your pick hand generally ends up after each strum. Most electric guitars have pickguards but some do not. Their purpose is to protect the finish on your guitar from being scratched by your pick hand.

Virtually all electric guitars have some kind of volume nob. And if your guitar only has one knob it is probably volume. This piece of hardware is fairly self-explanatory. If you turn it up, your signal will get louder. If you turn it down, it will get quieter. Volume is often also controlled on the amp, and/or with a pedal. All of these volume controls are co-modifying and work in tandem together.

Tone knobs are also very common on electric guitars, and are a key element of electric guitar anatomy. They work by eliminating or allowing high overtones. Every musical pitch is naturally a combination of a fundamental frequency, the one that gives the pitch its names, and which you consciously hear as the note’s pitch, as well as an infinite number of overtones, which are higher complementary frequencies that accompany the fundamental.

Tone nobs strip away some or all of those overtones, thereby changing the timbre of each note you play. In general, the lower you set your tone, the more high frequencies you will strip out, leaving you with a “warmer” sound, whereas setting your tone higher will land on the “crisper” side of the timbre spectrum.

Some guitars even have multiple tone knobs, which give the player even more control to shape their own sound by limiting or allowing multiple different frequency bands.

Some guitars with multiple pickups will have a toggle switch, which allows the player to choose which pickup or pickups are active at any time. Like with tone, pickups located at different points along the length of the string will create different combinations of overtones, and therefore different timbre. Most toggle switches allow any one pickup to be used alone or the signal from multiple pickups to be blended. Occasionally, pickup control will be a knob instead of a switch, but this functions in essentially the same way by transferring signal from one pickup to another.

The output jack is the opening where you insert the instrument cable that will connect your guitar to an amplifier. Output jack may be on the bottom, side, front, or even on the back of the guitar, depending on model. The chord connecting your guitar and amp carries the electrical signal created by your strings vibrating over your pickups to the amplifier, where the speakers will create the sound you actually hear.

Getting to Know Your Electric Guitar Anatomy Firsthand 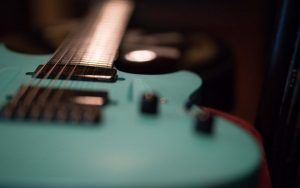 And those are the main parts of your electric guitar, and a basic overview of electric guitar anatomy. Learning how to use each one individually and in combination is an important step in developing your own specific sound, and in getting to know your instrument.

Take some time to play with the pieces of your instrument and understand how you can use them to express exactly what you want with the tool in your hands.