“Play something for us!” Maybe you’ve heard this statement before and then you freeze.  “I don’t know what to play … I don’t remember anything!” Let me tell you … you are not alone.  It’s important for every musician to have a few pieces in their repertoire that they can play at a moment’s notice. Even life-long students don’t always know what to play when they get a chance.

Easy to Remember, Fun to Hear 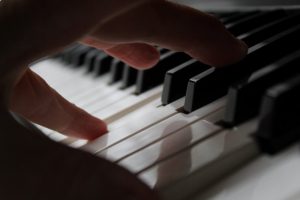 It’s best if you have some pieces that you can play that are easy to remember and fun to play and listen to. Good pieces like this have similar elements that make them sound impressive and beautiful to others. Let’s take a look at some easy piano songs that sound complicated. Let’s examine what makes these kinds of pieces sound so difficult and then look at some specific examples of pieces that when broken down, are actually easier to play then they sound.

The best advice any teacher can give to an up and coming musician is to make sure that they know their scales, triads and inversions and chord progressions.  This will not only help with strengthening their muscles but will also help with their understanding of how music is structured.  This will also develop their muscle memory and tonal center for different keys.

What Are Scales, Inversions, and Triads?

Some Other Helpful Qualities That Could Be Included in Easy Piano Songs That Sound Complicated: 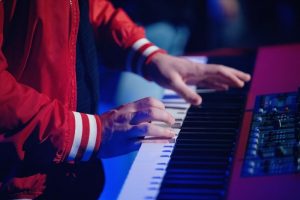 Now, onto some suggestions for pieces that are not as complicated as they seem! Most of the time, if you break a song down and see what the music tells you first, before you play it, then it is so much easier to learn.  I always tell my piano students to “read it through with their eyes first” and see what the time signature is, what key or position to be in, any patterns or repeated sections, the roadmap with any repeats and all of the details, like expression marks.

Fur Elise by Beethoven is one of those songs that is memorable, beautiful and easy to break down.  Usually most people have heard the introduction and that will help you learn it. Also, the right hand and left hand are almost completely separate so they are easy to learn and remember. Each arpeggio or melodic line is broken up between the hands and there are only 4 patterns in the left hand and the final 4 octave run is made up entirely of E.

Prelude in C by J.S. Bach is another great example of a piece that can be easily learned especially if you know your chords. Try to learn it by measures instead of note by note because each measure has it’s own chord progression. Often times there are only a few notes that are different between the measures and the rhythm stays the same throughout the whole piece.

Solfeggietto, by CPE Bach (one of Johann’s sons) is a piece that definitely sounds complicated but the good thing is that your hands are not playing at the same time. So even though it is a fast moving piece all over the keyboard, it doesn’t require the hands to play together. Rather, it works the pattern up and down the keyboard.  This piece uses the C minor scale as well as chord inversions and arpeggios.

So, those are 3 classical pieces and there are many more, but if you are interested in more contemporary songs that sound complicated, here are some good choices to start with.

Imagine, by John Lennon is an iconic solo by Lennon after the Beatles era.  The verses only use the C and F chords and the other chord progressions are very easy to get under your fingers. Also, if you memorize the chord progressions instead of the notes, you will have the song learned quickly.

The Heart Asks Pleasure First, by Michael Nyman as premiered in the movie, “The Piano” is a slow easy piano piece that has repeating patterns of 6 notes. The song is in A minor and C major and is played all on the white keys.

Other Ways to Find Easy Piano Songs That Sound Complicated

There are many, many great piano songs out there that sound beautiful and are just waiting for you to pick them apart and learn them.  Check out Noviscore or Musescore for some other choices and have fun!