A 5 string cello is exactly what it sounds like: a traditional cello with an added string. This instrument is tuned in one of two ways: with a high e’ or a low E. To accommodate the additional e/E string, a 5 string cello has a slightly wider neck, and shorter body.

Different versions of the instrument have existed through its 300-year history. However, it has always been viewed in the shadow of the four-string cello. This is because history’s most famous cellists have written and performed on the traditional instrument. Still, the 5 string cello has endured alongside traditional cello as well as benefited from the advancements in construction from luthiers and modern technology. 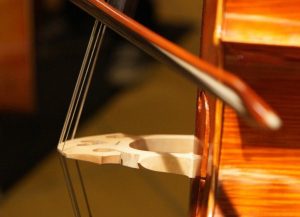 The 5 string cello is not a new invention. In fact, Johann Sebastian Bach’s Suite in D Major, written between 1717 and 1723, calls for “a cinq cordes” to accommodate the extended arpeggios and high range. Some music historians think this suite was written for the cello da spalla, essentially a small cello played like a viola. This Suite is very difficult on a traditional cello, which must use high positions including thumb position which is not historically accurate to the time period. The four string cello must also change certain chords. That means leaving out notes or re-voicing them.

However, on the cello da spalla the chords and range all sit predictably in the first four positions. And the sequences and ornamentation are practically easy. The cello da spalla has a shorter body than the standard cello to help the high e’ string tuning, and the reach of the musician. Although it was written for a different instrument, the Sixth Suite is more suited to a 5 string cello than the traditional cello.

The Cello Has Evolved Over Time

Both the traditional cello and 5 string cello have changed dramatically since Bach’s time. Since the Baroque period, the cello has evolved along with manufacturing technology in many ways. The biggest addition is the endpin to support the cello. This rests on the floor, rather than the musician holding the instrument with their calves. The modern cello’s fingerboard is also longer than its Baroque counterpart, thanks to cellist Bernhard Romberg (1767-1841).

Modern cellos also make use of new materials and manufacturing technologies. These include carbon fiber bodies and woven graphite endpins and tailpieces. Baroque 5 string cellos were only tuned with an open e’. However, modern 5 string cellos can also be tuned with a low open E. Electric cellos don’t need to worry about the acoustical effects of the open fifth string, but cellos with closed bodies (such as this one by Luis and Clark) are slightly broader for the wider fingerboard and neck. And also shorter to accommodate the changes in resonance.

Should You Learn 5 String Cello?

One of the difficulties facing cellists is a relatively small repertoire. Although if you know where to look there is plenty of easy cello sheet music online. Still, aside from the Sixth Suite, very few pieces specifically benefit from 5 string cello. The instrument is really underrepresented in the classical repertoire. Modern recording technology and distribution means the instrument could make a fifth string the next evolution in the cello’s construction.

Considering the abundance of repertoire for traditional cello, I would recommend beginners start with a four string cello and learn the instrument until they have total mastery of the technique. If you buy a 5 string cello as a beginner, make sure you have a teacher to help you adapt your technique for the instrument. This will prevent injury from overexertion of the left hand, and also help you make the most of your instrument.

5 String Cellos Are More Available Today Than Ever

Although they are not extremely common, 5 string cellos are more readily available today than ever. And they could be the next big thing with the right exposure. Just 37 years ago, Yo-Yo Ma recorded Bach: The Six Unaccompanied Cello Suites, his first recording of the works which brought widespread attention to the instrument (especially the Prelude in G). Maybe you could be the cellist who brings that much attention to the Sixth Suite with your own recording. There is a big gap in the cellists’ repertory where the five string cello is concerned.