When you’re learning guitar, you know how important it is to practice. Sometimes, however, you just don’t have time for a full practice session. This doesn’t mean you need to skip practice altogether. In this video, Austin, TX. guitar instructor Aimee B. teaches you how to practice guitar in 15 minutes…

If you want to boost your guitar skills, you need to increase your knowledge of chord voicings. There’s more than one way to play the same chord on the guitar. The good news is that the guitar is made up of a series of repeating patterns.

We will use a system, called CAGED to understand the five positions of a major chord on the guitar neck. Once you learn how to voice one major chord and its relation to the CAGED pattern, you can easily voice the same chord in multiple positions.

How to Practice Guitar in 15 Minutes

Approach your practice with a calm, positive mind. Take a minute to take a few deep breaths and visualize yourself with your instrument.

This is your time to focus on your practice, so give yourself permission to mentally let go of the other matters in your day.

Practice voicing the C, A, G, E and D major chords in the open position on the guitar neck.

The open position refers to the area of the first three frets on the guitar neck where you have open (unfretted) strings ringing out.

Practice moving smoothly between each chord. The goal is to memorize the shape of the chord, or the way it looks on the guitar. 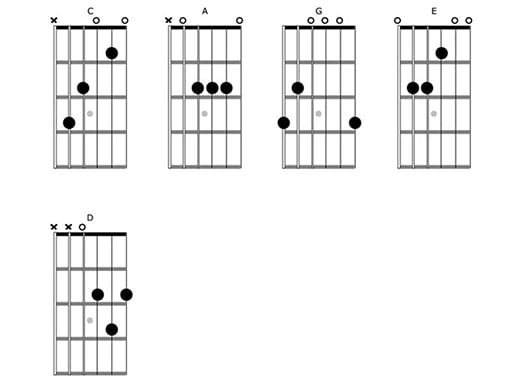 Five Minutes: Identify the Root of the C, A, G, E, and D Major Chords in Open Position

Again, the key is to think of the shape of the chord and memorize where the roots are within that shape. You don’t need to memorize string and fret numbers.

Use the following to check your knowledge of the roots in each chord:

NOTE: Instead of thinking of an open string as being open, think of the guitar nut located at the head of the guitar as being a finger holding a position.

In other words, visually approach the nut of your guitar as being another fingered fret. 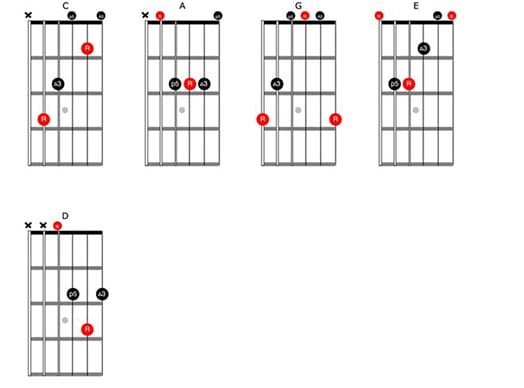 Eight Minutes: Take One Chord and Move through the Five Shapes on the Guitar (CAGED)

Play the C major chord, starting in open position, and move up (higher) on the guitar neck through the five different shapes of the chord. In all instances, you will play a C major chord.

The notes voiced in the C major chord are C, E, and G. All three of these notes that make up the C chord remain present as you move up on the guitar neck through the five positions. The only thing that changes is how the chord looks, or the shape, NOT the chord itself.

Here’s the easiest way to think of the five chord positions in the CAGED system:

REMEMBER: Where the chord shape ends, the next shape begins! 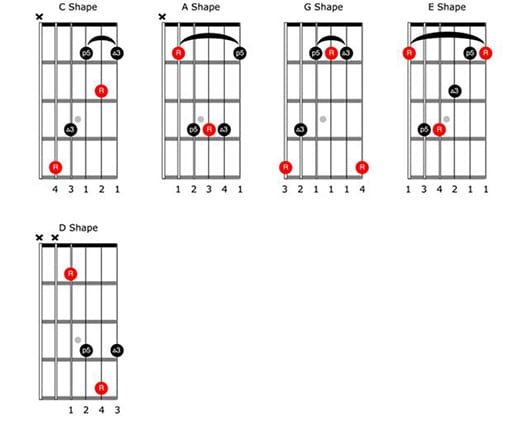 Repeat Previous Steps for the A, G, E, and D Major Chords

Once you have moved the C major chord through each of the five positions, continue through the CAGED system voicings with a different chord.

For instance, start on an open A major chord. The next shape for the A chord, moving up on your guitar, is the G shape, then E, D, and C.

Take a three-chord song you know in open position, find the next chord shape up on your guitar for each chord, and relearn the song in this new position.

NOTE: Some positions are more friendly to play in than others.

So next time you think you don’t have enough time, remember how to practice guitar in 15 minutes. Don’t let your busy schedule get in the way of your guitar playing journey.

Ready to get started playing guitar? Search here for a teacher near you! 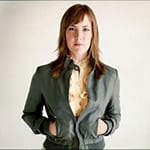 Post Author: Aimee B.
Aimee B. teaches piano, guitar and music theory in Austin, TX. She earned her B.A. in philosophy and art from St. Edward’s University, has worked as a professional musician for over ten years, and has taught over 100 students as a private music instructor.