You may have all of the resources to learn Korean, but can you speak like a native yet? If you can’t, we’ll help with that! In this article, guest blogger Anum Yoon from Current on Currency will teach you eight Korean slang words to make your speech sound more natural…

By now, you should be aware of the fact that Koreans love incorporating slang into casual conversations. In any given Korean drama or reality show, there are a variety of different slang terms being thrown around.

Slang expressions in Korea aren’t just used by the younger generations either; a lot of working professionals and parents use them as well since they’re so commonplace. Knowing slang, on top of other useful Korean phrases, will help you assimilate to the language even better.

Let’s take a look at the slang expressions you’ll be learning today.

Note: The following phrases are all in the informal Korean form.

The English equivalent to this expression would be “jackpot,” but you can use this phrase to describe anything from a delicious meal to a great movie. It can also be substituted for “wow” when expressing shock. It’s not uncommon to hear people exclaim “대박” upon hearing shockingly bad news or even shockingly good news.

Person A:   뭐가 그렇게 좋았는데?
What was so great about it?

This is a shortened form of “멘탈붕괴,” which is a combination of the English world “mental” and the word “붕괴,” which means “to destroy.” The word “mental” is often used to refer to the mental state of a person, so “멘붕” means to experience mental breakdown or to feel severe stress.

“불금” is short for “불타는 금요일,” which literally translates to “burning Friday.” This basically means TGIF, except it includes the connotation of drinking or partying.

오늘 불금이니까 제대로 즐겨야지.
Today is burning Friday so we have to enjoy ourselves properly.

“볼매” is the shortened form of “볼수록 매력있어,” which means “the more you look, the more charmed you become.” So it basically means that something is “growing on you.” This expression is often used to describe someone’s looks, or even clothing and accessories.

This is basically the same expression as “LOL.” The phrase literally translates as “to explode” or “to pop with a bang.”

This phrase is a compound word derived from the English word “something,” and the Korean word “타다,”  which means “to feel” or “to ride.” This means there’s something special between two people and they’re both riding this feeling. This expression appropriately describes the awkward phase before a couple becomes official.

The literal translation of this word would mean, “honeywagon.” But if you break down the word, you’d have “똥” and “차,” which means “excretion” and “car.” Koreans tend to add the word “똥” when describing something as less than desirable. For example, if you have an old, cheap, or broken phone, you’d call it a “똥폰.” You’d likewise call a cheap or broken down car a “똥차.” More interestingly, this phrase is also used among women to describe men who aren’t good enough for them.

저런 똥차한테 시간 낭비 하지마.
Don’t waste your time on a bad guy like him.

This is another compound word that combines the words “웃다” and “슬프다.” The equivalent in English would be “laughring.” Okay, maybe that doesn’t work as well, but it basically means to “laugh-cry.” It’s perfect for describing your feelings in situations where you don’t know if you should laugh or cry.

나 어제 너무 많이 먹어서 체했어. 웃프다.
I got sick after eating too much yesterday. I want to cry and laugh at the same time.

I hope this article was another fun way for you to practice speaking Korean! Be sure to take private Korean lessons to stay sharp and learn everything you want to know about the language. Happy learning! 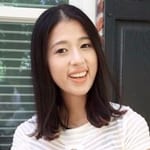 Post Author: Anum Yoon
Anum Yoon is an English/Korean teacher. She currently resides in Philadelphia, PA and is focused on her writing. You can learn more about her on her personal finance blog, Current on Currency.