Learn how to play acoustic guitar like John Mayer in these video lessons from guitar teacher Jonathan B.…

John Mayer has been called one of the new “Guitar Gods.” Claiming Stevie Ray Vaughn as one of his biggest childhood heroes, the blues and jazz influence on his pop style has given him more than just a niche in the radio market.

It’s also made him able to influence millions of guitarists with his playing style and techniques. He continues to release a steady stream of new music and fans continue to take interest in his songwriting as well as his guitar techniques.

John Mayer is equally well known for his electric and acoustic guitar styles; in this article we will focus more on the acoustic. There are several tricky picking hand techniques he uses which throw many would-be cover artists off the trail.

A few of his most popular songs in guitar circles are “Stop This Train”, “Who Says”, “Neon”, “The Heart of Life”, “Clarity”, and “Your Body is a Wonderland”. Although these songs have a few notable techniques in them, we’re going to focus on just one in this article.

The Pluck and Chuck/Pick and Flick Technique

Notorious for confusing guitarists for the last several decades, this technique involves a basic reversal of hand mechanics. You must learn to ‘flick’ the pointer or middle finger and ‘slap’ with the thumb at the same time.

The thumb does not play a note; it simply pushes the string into the fretboard and plants itself there. This creates a percussive effect that imitates the snare drum backbeat. Mayer’s sound is heavily influenced by music with a strong groove, so this technique lets you integrate softer fingerpicking with soulful rhythmic styles without any hitches.

This video has a detailed introduction to chuck/flick techniques, with the most detailed explanations starting at 4:33.

When you start to get the basic stroke to sound good, progress to the following exercises.

They are very simple but they contain the most essential set of motions needed for pluck and chuck songs. When you feel you need a variation or you want to explore a bit, try improvising with these patterns over some chords or making up a solo using the thumb to create a rhythmic drone and playing melodies with the finger plucks and chucks.

Chucks are a tricky technique that take some time to adjust to. It’s usually wise to start learning a song that doesn’t require too many flicks on top of the thumb slaps.

“Clarity” is a perfect example of this, and the main riff to the song is an excellent starting point as you tune your hand position to accommodate the new role of the thumb in your playing.

How to Play “Clarity” by John Mayer

The trickiest basic technique to learn is the ‘single chuck.’ John Mayer’s guitar style uses a lot of individually picked notes that coincide with thumb slaps, so this technique is very important. Aside from basic issues of hand position and accuracy, you have to also learn to mix different fingers into patterns of both plucking and chucking.

Mayer has a strong tendency to do all the flicking with just his index finger, although there are at least a few of his patterns that probably also need to be flicked with the middle finger since the string crossings would be very awkward otherwise.

A good pattern to start with is the opening riff to “Stop This Train.”

How to Play “Stop This Train” by John Mayer

As you start to get this down, it’s good to reach for something a little more adventurous. The opening riff to “The Heart of Life” requires you to pick out a specific melody, which requires you to cross a lot of strings and you chuck out individual notes. Here’s the tab for that passage.

How to Play “The Heart of Life” by John Mayer

Mastering this song is an excellent way to develop pluck and chuck technique. Once you’ve completed this song, you’re likely to find that you can improvise melodies over various bass notes, provided that you’ve already learned a little about improvisation.

One of the best ways to capitalize on your newfound skill is to try to write or improvise on your own changes in the style of “The Heart of Life” and “Stop This Train.”

The first time most guitarists attempt a John Mayer acoustic song they stumble on this technique. Most western string players learn to ‘pluck’ or ‘pick’ strings, where Chinese Pipa and Indian Sitar players prefer to ‘chuck’ or ‘flick’ the strings.

It’s a fundamentally different stroke than what most guitarists are used to, so learning it often makes players feel like a complete beginner.

Never fear, your guitar teacher will be happy to help you, and more and more guitarists are tackling this technique as time goes by, and the number of songs that use it has increased dramatically in recent years. 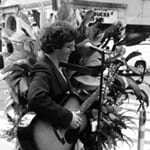