Have you ever heard a guitar lick that sounded crazy complicated? Guitar teacher Christopher S.  explains how some of the hardest sounding techniques can actually be easy once you try them…

When taking up the challenge of learning to play the guitar, I strongly recommend finding the skills and techniques that you are best at and using them to create the music you love.

There is an endless amount of sounds which you can create with the guitar, and if you have the skills to produce them, you will have so many options literally at your fingertips!

Below, I will discuss different techniques that sound hard to play on the guitar, but with time and discipline, they are actually quite simple. I want to emphasis that some of these techniques may come naturally to you, and some may not. In my experience, it is better to take the ones that come naturally, as you will make the best music with them, and to give the others more time for practice.

For example, you may be great at fingerpicking guitar licks on the guitar right away. Or, you may be incredibly fast at picking with a pick after just a few hours. Whatever the technique, I say learn as many songs as you can using that technique. Make the music that works best in your fingers, and don’t fret too much over a technique that is giving you frustration.

So, let’s buckle up and get ready to do some “wood-shedding.”

A power chord is one of the most common chord shapes on the guitar. It is easy enough to create, it is easy to move on the neck, and it sounds good in almost any style of music. The shape of the power chord looks like this, with your index finger on the low E string and your ring finger on the A string. 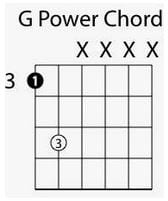 This happens to be a G power chord. You can also put your pinky on the D string, right below your third finger to give it some more “power.” The rest of the strings are muted.

This chord shape is important to learn on the guitar, because it is used to play millions of songs. However, your fingers can get tired in some kinds of music (such as punk rock or heavy metal) when trying to imitate and play the songs of these experienced guitar players. To help you in playing those quick power chord changes on the guitar, here is a trick that you can use to make changing power chords a breeze.

Known as “Drop-D tuning,” you literally take the low E string and “drop” or tune it down a whole-step, so that it becomes another D string. By doing this, you can play your power chord shape with one finger instead of three! The shape now looks like this. 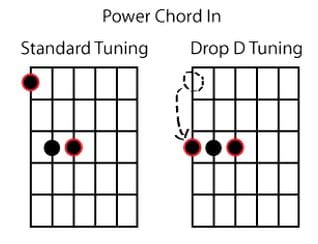 On the recordings of bands that use this tuning, such as The Smashing Pumpkins, Rage Against the Machine, or The Foo Fighters, these chords sound complicated. However, little did you know that they were actually playing all of those chords with just one finger!

An example of a song which uses a power chord shape with this drop-D tuning is the song “Hollywood” by Nickelback.

This song would be quite difficult if it were all played in standard tuning; however, in drop-D tuning, it is really quite easy to play! Here is the tab to help you learn it. Fingerpicking is something that always boggles people. It is really not as hard as some make it sound; however, it does take some disciplined practice if you want it to sound good. To develop this technique, I often recommend to my students to learn songs by The Beatles. Although sometimes they say, “Oh, that song is way beyond my skill level,” the songs are really quite simple to play.

Take the song “Blackbird,” for example. The tune sounds like it is quite a difficult fingerpicking pattern; however, because you rarely change the strings that you are picking, it is actually quite simple to play. The majority of the song is picked on the A, B, and G strings. The right hand always uses the pattern of thumb and middle finger together and then index finger after. That is the whole picking pattern throughout the entire song. Beyond that, all you have to do is move the left-hand position.

Here is the tab to “Blackbird.” Try the picking-pattern, and see how it works throughout the entire song.

This is a technique that will take some time to really master, but after you learn it, you will be playing the guitar faster than ever! The technique is basically how it sounds. When you are picking a crazy-fast solo on the guitar, your notes will come out much faster if you pick alternatively, rather than picking in one direction all the time. When you pick one note in a downward direction, the next note you should pick in an upward direction. See the diagram below for a representation of this movement. 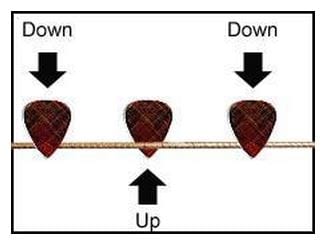 “Snow (Hey Oh)” by The Red Hot Chili Peppers is a good song to see how fast your picking can be, after you get the hang of alternate picking by practicing with scales.

The guitar line sounds difficult; however, if you have the alternate picking technique down really well, then this song will be as easy as pie. Here are the tabs to start learning how to play the main riff!

Here is a link to the entire tab.

Also known as the “Pick Harmonic,” this is a common guitar technique that came out of the music from the 80s and 90s and from the abundance of guitar solos in this time period. The sound is a high, screechy sound, but it sounds great if you’ve got the right amount of distortion when playing rock’n roll music.

Hold the pick so that there is only a small section of the tip showing. Then, as you pick the note in the same stroke, touch the side of your thumb on the string, but don’t hold it there. Continue the stroke so your thumb only touches the string for a second. Where you pick the string has a big effect on the sound that comes out, and every guitar has a different “hot spot.” Experiment a bit to find your guitar’s best location. Generally the hot spot is near the pick-ups of your guitar.

It will take some time to learn this technique, so don’t get discouraged trying to make the sound in the beginning. Just have some fun, and your guitar will soon be squealing! One group that frequently used this technique is the infamous Eddie Van Halen. You can hear Eddie squealing away on the song “Jamie’s Cryin’.” Here is a video of some awesome pick-squealing solos.

Here is also the tab for this song.

This guitar technique sounds difficult, and in fact it is a bit difficult, at first. However, with the right amount of practice and a loose wrist, you can actually begin to play awesome-sounding fast sweeps before you know it!

Sweep picking is a technique used mainly in heavy metal music, in which you play arpeggios at an incredibly fast speed. This makes your music sound awesome and really makes you sound like a pro with really very little effort.

To achieve this technique, let’s begin with the right hand. Simply take your pick and pick up three, four, or five strings (however big the “sweep” is). Then, when you get to the lowest string, simply pick downward until you are back at the high string (high E string).

And that is it! You are simply moving the pick upward and then downward on three, four, or five strings. These are known as 3-string, 4-string, or 5-string sweeps.

In the left hand, you make an arpeggio shape, and you generally have a pull-off on the high or low string of the arpeggio.

A great example of sweep picking can be heard in the song “Altitudes” by Jason Becker.

Here are the tabs to his solo, which occurs at 2:05 in the song. He plays them very fast, and I know they look intimidating, but just take them as exercises. Try playing the first arpeggio very slowly with the right hand technique I described above, and don’t forget to include hammer-on’s and pull-off’s on any consecutive notes on the same string (unless otherwise marked with a slide “/“ marking). Do the exercises slowly at first, and then gradually build up speed and you will soon be sweep picking just like Becker!

You can find a site to the complete tab here.

Think you’ve mastered these moves on your guitar? Getting some feedback and advice from a qualified guitar teacher can be the key to taking your guitar skills to the next level. Search for your teacher today! 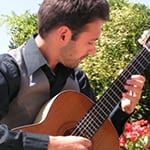