What are minor and 7th chords anyway? TakeLessons teacher Brian T. breaks down the music theory behind building these chords…

Learning guitar chords is one of the early challenges of learning the guitar. Very often a new student will find themselves presented with a host of fingering patterns that make little sense. “Why this set of frets and not that one?” the student wonders “Why, when I move my E major down a string does it become A minor?” With just a bit of music theory and a willingness to work things out, we can answer these sorts of questions on our own. With a bit of effort, we can even free ourselves from dependence on chord books and other reference materials!

Finding Notes on the Guitar

To make sure we’re all on the same page, we’re going to start by discussing the notes used in the western musical tradition and where they are found on the guitar. Western music is made up of twelve notes, which are commonly labeled in one of two ways:

Let’s review how we find these notes on the guitar. Moving one space to the right on the chart above (this is called, confusingly for guitarists, a half step) is the same as moving one fret “up” the neck of the guitar. If we start with the 5th (A) string open, we have an A. Moving to the first fret yields an A sharp; the second fret is B; we find C on the third fret, and so on. With the charts above and your the open strings memorized (E-B-G-D-A-E), you can find any note on the guitar!

A Brief Overview of Chord Construction

Though there are twelve notes available, any given song will stick – for the most part – to a set of seven notes that form the “key” of the song. For simplicity’s sake, we’ll look at the key starting with A and containing no sharps or flats; this key is known as “A minor”.

Now that we’ve established our key, we’re ready to make some chords! Each chord has a “root” note which gives the chord its name. We start by labelling the root “1”, and count up from it until all the members of the key have a number (we may need to loop around). If we’re making an A chord in our chosen key of A minor, it looks like this:

To form the chord, we play the notes labeled “1”, “3”, and “5”; in the case of our A minor chord, these are A, C, and E. That’s all there is to making a basic chord! Now of course, your guitar has more than three strings, so you’ll usually need to double up a few notes. Just make sure that the deepest sounding note is the root, and you’ll be good to go.

Lets look at building another chord in A minor. This time we’ll form a C chord.

What Makes a Chord Minor

If you’ve been playing along (and I hope you have, as this is the best way of learning guitar chords) you may have noticed that the A and the C chords we constructed above sound markedly different. The A chord sounds somber, even sad, whereas the C chord is cheerful. This is because the A chord is a minor chord, while the C chord is Major. Let’s look at why this is:

The distance between two notes, in half steps, is called the interval between them. As we saw before, each chord consists of a 1, 3, and 5. The interval between 1 and 3 is called, quite reasonably, a 3rd. Not all thirds are the same size. A look at the chart of the key of A minor shows that there are three half steps from A to C. There are, however, four half steps from C to E, which is also a 3rd. The smaller three half step version of the 3rd is called a “minor” 3rd, while the larger four half step version is known as a “major” 3rd. A minor 3rd leads to a minor chord, and likewise a major 3rd yields a major chord. We can see this using the two chords we built earlier, A minor and C major:

A minor 3rd yields a minor chord. That’s really all there is to it!

Adding 7ths to Your Chords

We need not limit ourselves to chords with only three notes! If we wish, we can add another just as we did before – by skipping one note in the key. We end up with a chord containing 1,3,5, and 7; not surprisingly this is called a 7th chord. Much like 3rds, 7ths come in two varieties: major and minor. The most common combination is a major chord with a minor 7th. This is usually formed on the dominant (V) member of the key, and heralds the return of the tonic (I/i). Lets look at an example, again from the key of A minor:

Hopefully this post has given you a bit of a better sense of what minor and 7th chords are, and how to construct them. Ultimately, the best way of learning guitar chords is with fingers on the fret board. Name a chord, figure out what notes make it up, and find it on your guitar – preferably somewhere down the neck where things are a bit less familiar! 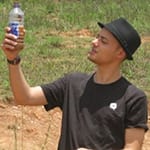 Brian T. teaches Economics, Geometry, Grammar, and Math in San Francisco, CA. He has been playing guitar for 14 years. He received his BA in Mathematics and Economics at University of San Francisco, where he studied Classical Guitar and Music Theory for three years.  Learn more about Brian T. here!