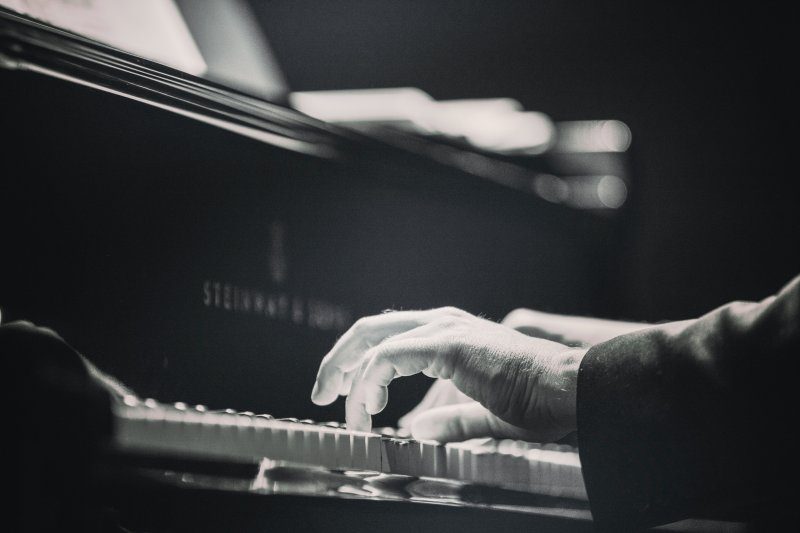 While it’s easy to name Beethoven and Mozart as a couple of the most incredible famous pianists, there are so many more out there! In fact, there are easily dozens of famous piano players keeping beautiful music alive today and interpreting it in new and exciting ways.

Listening to various piano artists is a great way to stay inspired as a musician or even someone who simply loves to listen to music.

We’ve compiled a list of our top 10 famous pianists of the 21st century and a video so you can enjoy listening as you please!

Who Are Some Famous Pianists Today?

With so many outstanding pianists, it can be challenging to narrow it down. But, here’s a list of 10 well worth a listen!

Mitsuko Uchida was born near Tokyo and raised in Europe. She has built a fantastic performance, scholarship, and conducting career.

Mitsuko Uchida has appeared with the world’s best orchestras and has been honored with numerous awards.

Below is her outstanding performance of Beethoven’s Moonlight Sonata. Notice her incredible attention to detail, especially dynamics and texture!

Born in China, Lang Lang began playing the piano at the age of two. He studied with a college professor at age three, then won a regional piano competition at age five.

Now he performs and teaches globally and is one of the most well-liked famous pianists today. His intuition and sensitivity are clearly evident in his playing.

Marc-André Hamelin, from Canada, is one of the most famous piano players in the world. He’s known for his original performances of the classic repertoire.

Many musicians and listeners see Marc-André Hamelin as having a technical proficiency unlike any other. It’s no wonder he’s earned himself 11 Grammy Award nominations!

His energy and flawless technique have made him a well-respected figure in the world of piano.

Take a look at Paul Zarukin’s playing in the D major 01 Ouverture:

An American jazz pianist, Brad Mehldau started his career when he was a student at New School in Manhattan. He started his own trio in the early 1990s and has been impressing his audience ever since.

Brad Mehldau mixes the classical form with jazz harmonies. He’s also a composer and arranger who has played and recorded with iconic jazz musicians like Lee Konitz.

Said to be the best-selling jazz artist alive, Diana Krall is a Canadian singer, songwriter, and one of the most famous pianists of the 21st century.

Take note of her careful touch on the keys in this unexpected rendition of the Mamas and the Papas classic “California Dreamin’.”

Martha Argerich was born in Buenos Aires to Spanish and Russian-Jewish parents. She is now considered one of the greatest piano players of the latter part of the 20th century and into today.

She won two big piano competitions the year she turned 16. Marvel at this famous pianist, and her interpretation of Beethoven’s Piano Concerto No. 1 in C Major, below.

These renowned piano players bring their own special and unique talents to the piano keys. A couple are sensitive and intuitive, while others are clean and technical.

Yuja Wang is a Chinese classical pianist from Beijing. Her music study began when she was a child. She studied at the Central Conservatory of Music in Beijing and the Curtis Institute of Music in Philadelphia.

She’s been recognized for her mix of incredible piano playing techniques, which you can enjoy in the video below of her performing at a 2021 piano concerto:

Not only is Cory Henry one of the most incredible famous pianists of today, but he’s also a singer, songwriter, organist, and record producer. He was once a member of Snarky Puppy, an American instrumental ensemble. Now, he’s a solo artist.

A French classical pianist, Hélène Grimaud is incredibly passionate about her music. She grew up playing the piano and studied at the Conservatoire de Paris where she won several awards that helped her begin her piano playing career.

Not only is she one of the most famous pianists today, but she’s also the founder of the Wolf Conservation Center in New York.

Perhaps the most significant benefit of listening to many famous pianists is learning that we’re all different when we play, and that’s why we call it “art”! Which famous pianist would you add to the list? Leave a comment below!

If you want to practice your own piano playing skills, consider taking a class with one of our professional piano teachers.

Heather L. teaches piano and more in St. Augustine, FL. She is a graduate of the prestigious Westminster Choir College in Princeton, New Jersey, and has performed with the New York and Royal Philharmonics. Learn more about Heather here!