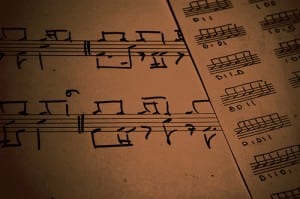 Want to get started writing music of your own, but you’re not sure where to begin? Arlington TX music teacher Ric F. shares his secret to composing interesting and meaningful music: start with the rhythm. Follow Ric’s great advice and start sharing your music with the world!

Like any subject, songwriting has techniques that can be learned and mastered. Songwriting mainly involves these musical elements:

You do not have to be a master of both music and lyrics to be a songwriter. Though many songwriters do both, many others do one or the other and collaborate with someone else. Some songs list several writers.

A simple example of how important rhythm is this:

If you do not read music, the example on the left is a major scale going downward. It’s the “do-re-mi” scale as some say. The example on the right is the exact same pitches (tones if you will) but with a different rhythm – that is the only difference! The result is the opening melody of the Christmas carol “Joy to the World”. If you’d like to hear it, there is a video featuring the voice of Morgan Freeman called “The Christmas Scale” that uses this same example.

In general it is rhythm that brings the most character to the music.

Rhythm can get complicated, but in most popular music, rhythm is in what we call 4/4, 3/4 or 6/8 meter (a simple explanation of meter is: beats in each measure). Rhythms may vary within the meter.

The above example is merely to point out something which is: Do not underestimate the power of rhythm to bring character to your music, especially in your melodies.

Musicians often get into complicated chords and other things, such as “production-recording” and fail to remember that the melody (pitch applied to rhythm), in songwriting is usually the most important element and that the rhythm is what gives the melody its greatest character. Of course, some of this also depends on the style you are working in. Some popular music has little to no actual melody!

How to Write Music With Rhythm

So, what you may want to try is to make up a simple melody. If you can write it down in notation, do so and then try different rhythms. You can move a quarter-note a bit left or right – anticipate, suspend. If you do not notate your music, make up something and improvise some variations much like a jazz scat singer might do, though it does not have to sound jazzy.

With my own songs, I start with a drum or percussion rhythm. You can get drum or percussion loops (recordings of a measure or so) fee online.  Some scoring programs such as Finale also come with drum and percussion patterns you can loop over a period of time.

I’ll find a rhythm that attracts me (in my case, I like Latin rhythms) that I play and make up melodies to. Sometimes I sing to them, sometimes I use an instrument. You’ll be pleasantly surprised how the “rhythm” will shape your melodic elements.

Try taking a 4-8 measure drum pattern and create a melody to it. Start there. Once you have a melody you like. You can try some variations by changing the rhythm – add some syncopations!

I have taught composition, including songwriting for many years. This is not the time to get too heavy into the philosophical, BUT, please know that your creativity will improve with your “knowledge”.  Theoretical topics can be taught. Practicing them over and over, like you would an instrument or voice is how you get them to become second-nature. Generally, the more you know how music works (which is what music theory, simply put, is) the more creative you will be.

Ric F. teaches songwriting, music recording, and music theory in Arlington, TX. Ric specializes in music composition and can teach anything from arranging and orchestration to film scoring. Learn more about Ric or search for a teacher near you!

You might also like…
–Play Thousands of Songs Using these Guitar Chord Progressions
–What’s Your Musical Personality? [Infographic]
–Open Mic 101: How to Overcome Stage Fright & More