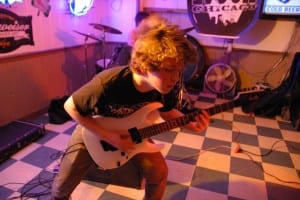 What is the secret to great guitar playing and making the guitar “talk”? No matter how many complex techniques you work on, the most important thing you can learn is how to play with feeling.

Playing with feeling is the same as thinking of what you want to say in a conversation when you talk. When you’re playing in a group, the importance of listening to the other players can’t be understated.

When you’re playing with other musicians, don’t just react to yourself and what you play.  Listen to what others are doing and learn from them. This makes you a better teammate and a better guitar player.  Jamming and playing with others is better when everyone plays.

When you listen to others, you’ll also develop your ear with your own playing. For example, you may start noticing the differences between scales. The minor pentatonic is gritty and has some bite to it. The major pentatonic has a more old-time, smooth blues feel to it. Of course, making these sound like music as opposed to scales is an art unto itself, and that’s why you really have to listen. Think of notes as being different colors in the crayon box.

Another part of listening is knowing when to play and when not to. Music is like talking; you have a moment where you pause to breathe in and out. Play and leave space for others to play, too.

After you’ve learned the basics, you can then expand into the more complex patterns on the guitar, having fun as you learn and go forward. As you’re learning and picking up new ideas and songs along the way, it becomes more and more fun.

A great place to start is with these five basic scales:

Work on these five basic patterns in each key, and learn the formulas for the scales. A lot of rock and blues and some folk Music is based on these scales; use these and build road map of the neck. This map gives you a clear picture of where you are going. You are not lost. Playing becomes easy. 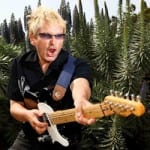 James W. teaches singing, acting, and guitar lessons in Gainesville, FL. He specializes in teaching pop, rock, and modern country styles. James has been teaching for 10 years and joined the TakeLessons Team in March 2010. Learn more about James or search for a teacher near you!