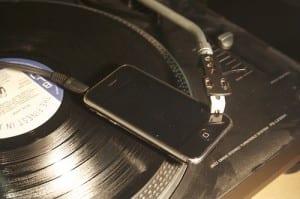 What sounds better: analog or digital recordings? This long debate still rages among audiophiles. As Record Store Day on April 20th approaches, you can be sure to find lively debates in your local music store about what sounds better.

So what’s all the fuss about? Basically, analog and digital methods of recording capture sound in different ways and tend to showcase slightly different ranges of sound. Many audio enthusiasts insist that these subtle differences in sound between analog and digital recordings completely change the atmosphere and emotional impact of music. Ready to learn more? Keep reading and you’ll be able to hold your own in the great analog vs. digital debate.

You probably know that sound travels in continuous waves. Analog methods of recording capture sound in a wave form, just like the way you naturally hear it. Digital recordings, however, track sound as a series of signals. Modern digital recordings capture each distinct signal with such accuracy and at such a rapid rate that the human ear cannot detect the space between each signal; the sound is continuous. Digital recording often create very large file sizes that must be compressed for your iPod to play as an MP3 file. According to analog lovers, the compression involved in the digital recording process leads to a loss of the “richness” and “life” of the sound. An analog-loving audiophile might tell you that analog recordings sound warm and full, whereas digital media sound cold and hollow.

Digital recording does have advantages though. Digital files will not decay or corrupt in the way that analog media do. You can also make unlimited copies of a digital file without sacrificing fidelity of the sound. In fact, many audio engineers now agree that digital recording techniques are just as good, if not better, than their analog counterparts.

No matter how the jams you’re rocking were recorded, it’s very likely that the type of sound system you’re using will make the biggest difference in sound quality. Even the most pristine recording in the world isn’t going to sound its best coming out of tiny laptop speakers. Whether you prefer vinyl, CDs, cassette tapes or MP3s, investing in some quality speakers or headphones is probably the fastest way to completely transform your listening experience. Most new vinyl albums now include digital download codes, and Amazon will even “Auto-Rip” any LPs that you buy straight to your computer, so there’s no need to listen to music in any one format exclusively. Head down to your local indie record store on the third Saturday in April and enjoy the Record Store Day festivities!

What’s your favorite way to listen to music? Where do you stand in the analog vs. digital debate? Let us know in the comments!

You might also like…
– Are Music Festivals Worth the Price?
– Song Stuck in Your Head? Here’s the Cure
– There’s a Music App for That: Infographic

One thought on “Analog vs. Digital: Which is Better?”