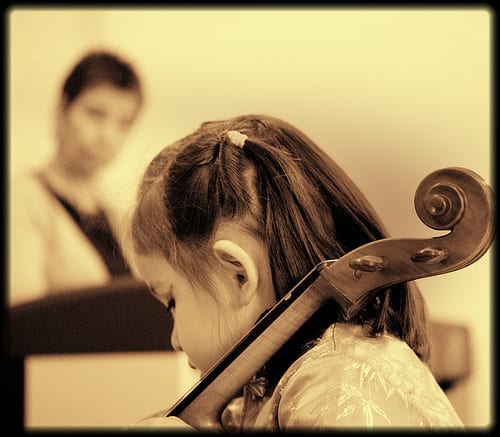 When you’re in the process of selecting a great music teacher – especially for violin lessons or piano lessons for kids – there’s a good chance you’ll come across the buzzword “Suzuki Method.” But what exactly does that mean? What is the Suzuki Method, and how does it differ from other kinds of lessons?

In a nutshell: The Suzuki Method was pioneered by Japanese violinist Shinichi Suzuki, who combined his teaching style with the philosophy of “Character first, ability second.” To Suzuki, music should be treated like a language – and exposure can (and should) start from a very early age. By providing the right environment, requiring parents to take an active role in the lessons and focusing on the total development of the child, he believed kids of any age could flourish in the arts in the same way they learn their native language. This method encourages daily exposure to music, through concerts or playing music with other children, learning music by ear as opposed to reading it, and frequent performances.

Although it’s most commonly attributed to playing the violin, the Suzuki Method has been adapted for several other instruments, including piano, guitar, flute, cello and voice.

So, what does this mean for your lessons?

For one, as a parent, you  may be expected to sit in on your child’s lessons, as well as their practice time. While your teacher’s preferences may vary, the idea is for parents to have an active role in the process. For some instructors, this may mean sitting in on the lessons. Some teachers might encourage you to take lessons, as well. Others might just ask you to spend time outside of the lessons playing and listening to music together.

What are the drawbacks?

With careful research, you might also be seeing some of the critiques that the Suzuki Method has received. One of the top concerns is that actually learning how to read music is not emphasized until later on. To the Suzuki traditionalists, children should learn to play first, similar to learning how to talk before learning to read. This can be a disadvantage as the student gets older and joins orchestra programs, where sight reading music may be required, or if they want to switch instruments. Another critique is the over-involvement of parents (“helicopter parents” might come to mind). However, when done the right way, parent involvement is a great way to show support and encouragement for your child.

Keep in mind that many instructors teach a more modern application of the style, using a child-friendly approach while still introducing the student to musical notation. A good rule of thumb is to talk with your teacher to get a feel for his or her style, as well as the expectations of you as a parent. In the end, the most important thing to consider is not so much which method your instructor follows, but how he or she interacts with the student.

You might also like…
– Beginner Music Lessons: Starting Your Child On the Right Foot
– Supporting Your Child in Music: Practicing Tips
– All I Really Need to Know I Learned from Music Recitals