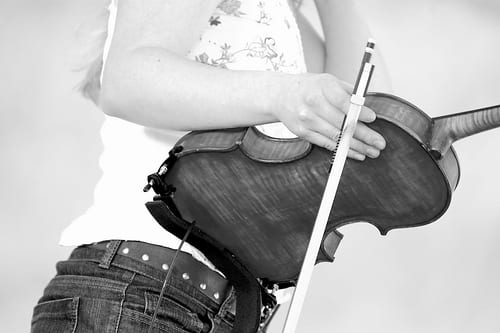 To the uneducated, the idea of playing the violin might not have the same mass appeal as, say, shredding on an electric guitar or rocking out on the drums. Some people might even think of classical orchestras as old-fashioned and stuffy.  But in reality, the violin is far from boring!

With the emergence of styles like hip hop violin music, stringed instruments are getting their spotlight in mainstream music more than ever.  And as you continue your studies, you’ll learn there are definitely ways to make your strings more interesting.  Here are a few to try…

You’ll learn these techniques at some point in your studies, and they’re worth keeping in mind when you want to add a little spice to your playing. Vibrato describes a slight yet rapid variation in pitch, centered on one single note.  Players can use their arms, fingers or hand to create the effect, although most violinists use a combination of finger and hand. A trill, on the other hand, is when a player rapidly interchanges between two adjacent notes (typically a major or minor second above the starting note). It may take some practice to play trills that are even and smooth, so be patient and keep your finger as close to the string as possible.

Creating harmonics, also called overtones, involves placing your finger lightly on a specific division point on a string, creating a higher-pitched and almost flute-like sound. Harmonics are usually marked either with a small “o”above a note, or a diamond shape indicating which string should be touched.

These terms describe chords played on the violin, as opposed to single notes – the beauty of playing a stringed instrument! A double stop is played using two strings, a triple stop utilizes three strings, and so on. It’s a tricky technique for some, so you may need to dedicate some time practicing slowly, balancing your bow and making very small adjustments to the angle of your wrist and hand until you get it right.

As we mentioned earlier, hip hop violin music has become increasingly popular over the years, with artists like the Black Violin, Miri Ben-Ari and Paul Dateh making waves. Veteran YouTube stars The Piano Guys have also brought modern spins to classical tunes that appeal to the masses.  We’ve seen stringed instruments featured on other genres as well, including rock and electronic. The point is – feel free to experiment!

Although violins are typically used in classical music, if you’re interested in experimenting with some of the styles described above, an electric violin might be right up your alley. Electric violins generally have a sharper tone than acoustic violins, and you’ll also find several variations in design, such as extra baritone strings and machine heads. Once you’re plugged in, you can experiment with different amplifications, effects and more.

Get our exclusive music updates and expert advice, tips and more – right in your inbox! Sign up for email updates here!

You might also like…
– Adding Color to Your Violin Music
– Should Classical Violinists Learn to Improvise?
– Playing the Violin: Understanding the Bigger Picture