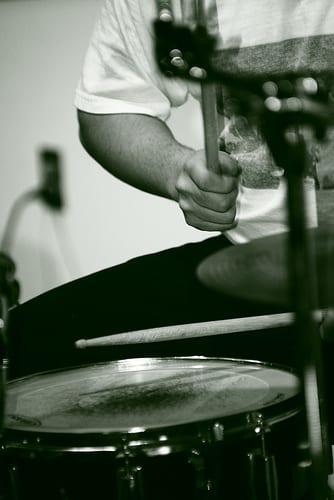 Playing along with songs can be an effective learning technique, especially for drummers.  With the background music in place, you can then practice different drumming styles, as well as practice staying in tempo, if that’s something you’re struggling with.  Here is a recommendation from Jeff F., one of our Chicago drum teachers:

As a working musician and teacher I have found playing along with recordings to be a valuable learning tool.  Doing this enables you to really get inside a particular player’s style.  I would recommend listening to the recording you want to play along with at least three times before playing along.  Listen intently, highlight any confusing spots, and go over them until they no longer confuse you. Consider a variety of styles, because stylistic knowledge is one of the main keys to being a working musician.

One of my favorite play-alongs is Stewart Copeland’s drumming on “So Lonely” from the first Police recording Outlandos d’ Amour.  This track has two different beats between the verse and chorus, and the verse beat is sometimes called “big two” or half time.  You are playing eighth notes on the hi hat, and the bass drum is accenting on four and one.  Snare is on beat three, but I have found it easier to think of that beat as 2, hence “big two.”  When Stewart transitions to the chorus he switches to a powerful straight rock groove, two and four on snare hi hat remains constant eighths.

Some things to highlight:
The groove in the entire song is undeniable, and this should be your main focus.  Try to get the same feel for the groove.  I have spent more time with the verse because I love the groove so much.

Watch for fills in the verse; these are subtle, but also deceptive in their placement.  As you listen to more of Stewart’s drumming you will hear many of these, as he is a master!  I hope you enjoy learning this great groove!

Want even more expert advice from our teachers?  Sign up for email updates here!

Jeff F. teaches drums, percussion and speaking voice lessons to students of all ages in Chicago, IL. He holds a Master’s degree in Music from DePaul University, and has been a TakeLessons instructor since February 2011. His specialties include a variety of percussion styles, including jazz, rock, classical and world. Sign up for lessons with Jeff, or visit TakeLessons to search for teachers near you!