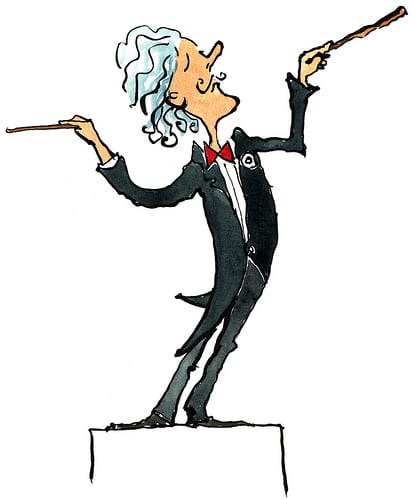 Yesterday, April 30th, would have been the 96th birthday of the late Robert Shaw, famed conductor and founder of his namesake Chorale and the Atlanta Symphony Orchestra, most notably.  Shaw won 14 Grammy awards and 4 ASCAP awards throughout his career, and is best known for helping turn choral conducting into a true art and setting forth the standards of excellence that are still in place today.

While many conductors see vocal warm-up exercises as just that – warm-ups – Shaw saw it as precious time to sharpen singers’ techniques and work on acting as an ensemble.  For Shaw, warm-ups should be both effective and relevant.

Chorus America has a great article about Shaw’s technique (along with some great audio clips) that is definitely worth the read.  Below are some of the highlights from the article, explaining some of the exercises Shaw used:

1. Vowel Unification: A single pitch, sung in unison (or octaves) on the nonsense syllable, “noo.”  Begin on a moderately low pitch, such as E, and move down by semitones. This exercise allows the singers to concentrate on nothing more than basic vowel unification and tuning.

2.  Divisi Textures: Two, three, then four pitches sung on “loo” or “noo,” creating a whole tone cluster. Singers may also sing on “nee” or “naw” or move from “nee” to “aw.”  This exercise is useful for determining balance issues in two-, three-, and four-part divisi textures. In addition, the dissonance created by the cluster pitches is preferable to more consonant intervals because one can more readily determine if one voice part is overbalancing the other voice parts.

3. Intonation: Beginning on a moderately low pitch such as E, move up a semitone in 16 pulsed unison pitches (effectively dividing the semitone into 16 separate notes, with each sung almost imperceptibly higher than the last). For even more intensive ear training, a minor third relationship between lower and upper voices may be used.

4. Changes in Acoustics: Beginning with a unison pitch on “noo” or “nee,” change vowels rapidly ad lib while slowly turning 360 degrees. This forces the singer to listen acutely in order to maintain a consistent pitch as the acoustics in the room change.

5. Tone Color: Begin with unison pitch on “nee” with an overly bright vowel. Crescendo and darken the vowel. Do the exercise again, beginning with a tone that is too dark, gradually brightening the vowel during the crescendo.

You might also like…
– Using Scales to Improve Vocal Range and More
– Find Your Voice as a Singer: 4 Tips That Work
– How to Sing Better With One Simple Trick

One thought on “Vocal Warm-Up Exercises Inspired by Robert Shaw”